One of the few singers to address the audience ahead of their Fleetwood Mac cover on Tuesday night at the Fonda Theatre, Dead Sara‘s Emily Anderson summed up the empowerment that often comes in hearing Stevie Nicks sing. “When this song comes on the radio in your car or in a bar, you are the best singer,” she said of karaoke classic “Edge of Seventeen”, before giving a faithful, emotive rendition of the song. It was one of the more on-point vocal performances of the night, even if the stage persona could be seen as off-putting or entertaining depending on where you stood.

Anderson unwittingly explained the central problem of the often flawed Fleetwood Mac Fest: Too many of the evening’s singers were inspired by their sing-along attempts with the Fleetwood Mac source material but were unable to match the complexities of Nicks, Lindsey Buckingham, and Christine McVie. Out there onstage, attempting to carry the melodies of a trio of all-time greats was more than many of the artists billed could handle. And unfortunately, a night of relaxed celebration of the songwriting of Fleetwood Mac (with proceeds benefiting Sweet Relief) also became a lesson in how difficult the Mac are to replicate.

Some of the bill’s biggest names were the biggest offenders. Courtney Love chose one of the most powerful slow-burners of all-time, “Silver Springs”, rather than the more obvious “Gold Dust Woman” and tried to growl and bark her way through it. The results were flat-out depressing, with Love resorting to flashing her underwear on her stage exit in an attempt to erase the memory of her vocal performance. Alison Mosshart of The Kills was equally unprepared to touch the range needed for “Dreams”, air balling note after note, while Mark Ronson stood back with little to do on a song hardly known for its guitar part. Elsewhere, Dhani Harrison and Mereki’s attempt to tackle “Landslide” couldn’t find the proper key, Cold War Kids chose to hide on a darkened stage while simultaneously disappearing musically, and Juliette Lewis proved that there is a point where over-the-top performing becomes horrific.

That isn’t to say the night didn’t have its standouts. Despite performing from a hidden corner of the stage, Joanna Newsom put her own stamp on the Tusk deep-cut “Beautiful Child”, successfully finding a lovely and unique interpretation of Nicks’ vocals without trying to replicate them. Jamestown Revival also stuck to their own identity in their excellent version of “Never Going Back Again”, hauling out chairs and a Dobro to give the intimate Buckingham track the reverence it deserved. And early evening turns from Carly Rae Jepsen, Lucius, and Noah Gundersen all struck as playfully skillful, finding a balance between the evening’s loose structure and the expectations of the audience to hear professionals sounding professional.

Because by the evening’s big finish, whole-bill renditions of “The Chain” and “Don’t Stop”, the wheels had almost totally come off. The blame didn’t fall on the always capable Cabin Down Below Band, whose ability to churn out the entire catalog is always admirable. No, the songs sank because of silly reasons, like singers not knowing their parts or simply not being able to adequately perform them. Towards the end of “The Chain”, Mosshart jumped on the shoulders of Butch Walker during his guitar solo. As Walker struggled to complete his musical task, Mosshart laughed and sang, her voice now gone from the mix as she was raised far away from a microphone, happy to sacrifice the number’s technical sharpness for a bit of showmanship. It was an unfortunate paradigm for an evening that fell short of the Best Fest’s typically high standard. 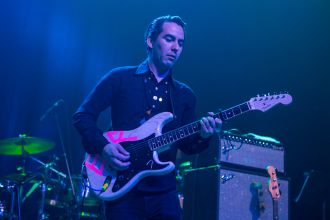 The Pierces // Photo by Philip Cosores

The Pierces // Photo by Philip Cosores 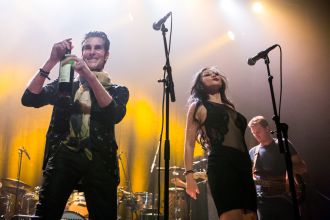 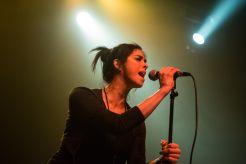 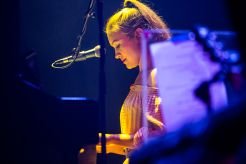 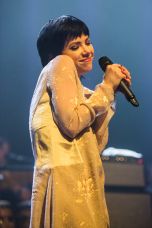 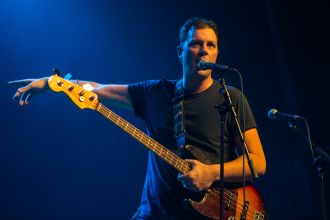 The Cabin Down Below Band // Photo by Philip Cosores

The Cabin Down Below Band // Photo by Philip Cosores 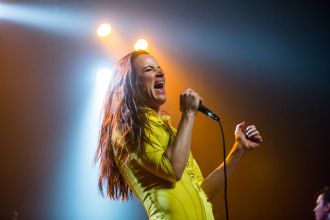 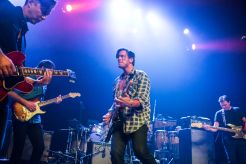 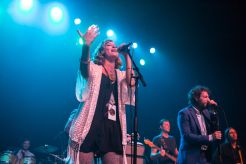 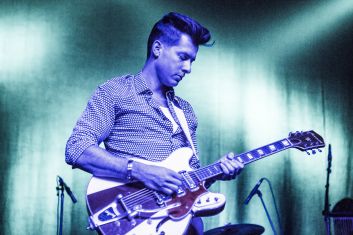 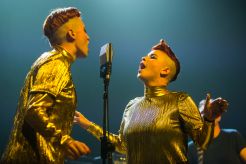 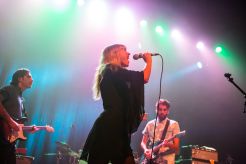 Will Forte // Photo by Philip Cosores 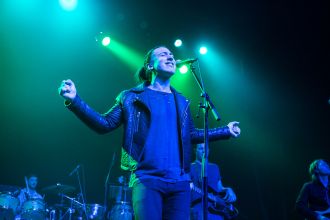 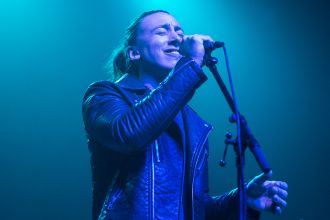 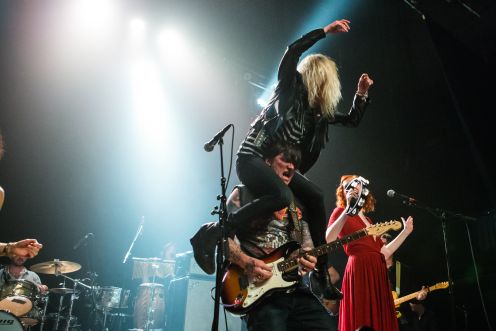