Community is priceless. It’s not something that can be bought. It’s not even something you can create. It’s something you earn. Pearl Jam has spent over two decades cultivating that privilege, and they’ve never once abused it. Ten albums later, they’re stronger than ever, having amassed a die-hard following that doesn’t care if Lightning Bolt might be their weakest album to date or if over half of their setlist capitalizes on post-2000 material. They’re not there for the music; they’re there for the people.

On Friday night, as the springtime Florida sun dwindled over Ft. Lauderdale’s BB&T Center, thousands upon thousands of fans walked toward the venue at the same pace, smiling, joking, and trading anecdotes about one another’s tour shirts. A few lucky souls jogged the opposite way, clutching on to a poster tube, which only proved that they’d arrived hours ahead of time to snatch the prized merchandise. Nobody was jealous, though; in fact, most congratulated them on their efforts.

Inside, the already pleasant scene escalated into a balmy cohabitation. As the minutes inched by, those same fans found their seats and eschewed what traditionally boils down to bland pleasantries in favor of what could best be described as Pearl Jam Small Talk. One nearby couple showed off their Pearl Jam onesie to a pair of newfound friends while another digressed on how he likes every album they’ve put out, to which his new neighbor contended, “It depends on the mood.”

Such positivity is rare at any concert, but especially rock ‘n’ roll. Look, I’ve spent the majority of the past decade rallying against the drunk idiots that treat every live gig like a mid-life crisis, flailing around and arguing as if they either don’t know or don’t care that everyone around them thinks they’re an asshole. Maybe that happened somewhere in the BB&T — it’s entirely possible; after all, the odds were quite high given the near-capacity crowd — but that just wasn’t the overall atmosphere.

There’s a reason I’ve spent half of this review highlighting the fans and not the band: they’re one and the same. The symbiotic relationship between Pearl Jam and its chummy, devoted fanbase is stronger than whatever oak spurred that metaphor, and by recognizing that bond, one can actually understand the truest talents of Eddie Vedder, Stone Gossard, Jeff Ament, Mike McCready, and Matt Cameron. (Okay, and Boom Gaspar.) They’re not only brilliant musicians to everyone; they’re old friends.

“We’re so grateful for the energy coming from you,” Eddie Vedder admitted late into the set, adding: “We got some rough news today.” Visibly shaken, he explained that the band lost a former member of their crew that morning, Tim “Skully” Quinlan. The late husband and father of two had originally served as a guitar technician for Gossard and Vedder back in the ’90s, and the humble frontman waxed nostalgic about their time together, contending that his crew has always been like family.

And so, they dedicated their performance of Binaural cut “Light Years” to Quinlan, but not before the crowd offered a deafening standing ovation for the man they never knew. Again, there’s an inherent quid pro quo between Pearl Jam and their fans, and after they hugged Vedder, he returned the favor. Towards the very end, Vedder honored one of the dozens of signs floating above the GA crowd — a request for his cover of Little Steven’s “I Am a Patriot”. By who? A proud father of a fallen veteran.

Now, it should be noted that Vedder saw this sign and agreed to play it prior to his homage to Quinlan. He also kept his word after they ran through a sweaty, vivid, and epic series of anthems: “Better Man”, “Alive”, and their incendiary cover of The Who’s “Baba O’Riley”. To be fair, the night could have ended there — they were also way past curfew — but Vedder remained steadfast and urged the technicians and his bandmates to continue. There was no way he was leaving after he promised the man.

“Let’s see if I remember it,” he thought aloud, thumbing a little on his acoustic. Never one to shy away from politics, he added, “You’ve got more veterans in Florida than anywhere in the country,” to which he justly criticized America’s “shameful” neglect for its own soldiers. When he was ready, he looked the man straight in the eye and said, “This is for your son, Tyler.” Mind you, this was all in front of a still-packed arena that was catching their breath after screaming, “We’re all wasted!”

It was surreal, but so was the entire night.

Going into a Pearl Jam show, you never know what to expect, and that mystery mostly stems from their uncanny setlists. Yet Vedder took Ft. Lauderdale on an emotional roller coaster that went above and beyond another unique entry for Setlist.fm. We laughed at his wine-fueled short story about hotel tiling, we sighed when he brought one woman to tears on-screen during “Footsteps”, and we quickly cheered as he serenaded her during “Last Kiss”. Hell, we sang “Happy Birthday” to McCready. 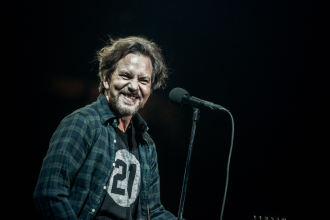 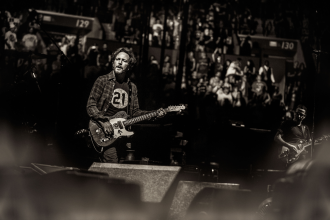 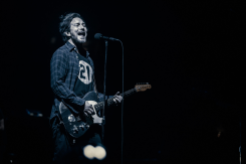 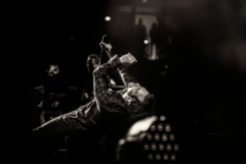 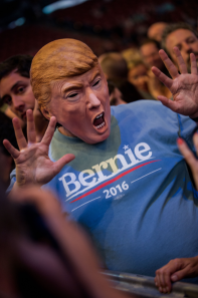 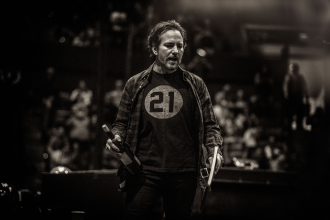 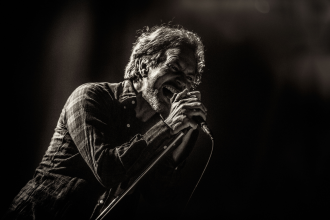