“Why do people rank albums?” Wilco’s Jeff Tweedy asked nearly halfway through his band’s fifth and final night at The Fillmore in San Francisco on Sunday night. “That’s like trying to rank your friends. Would you rank your friends?”

And while we could debate the merits and flaws of criticism of this sort (obviously at Consequence of Sound we like to rank, uh, pretty much everything), Tweedy’s point was backed up in the band’s performance at the best concert venue in America. Nine out of the group’s 10 studio albums featured on the setlist — sorry fans of Wilco (The Album) — and some of the band’s better known tunes were omitted in favor of rarely played deep cuts. When Tweedy asked the audience if anyone came to all five nights and received a sizable response, he joked that Wilco wasn’t the Grateful Dead with new setlists every night. But that wasn’t really true of the five-night stand. In actuality, each performance was different, with some songs popping up more frequently than others, and attention given to a remarkably wide range of tracks.

Sunday was also notable for what wasn’t featured. Despite the fact that Yankee Hotel Foxtrot was written and recorded before 9/11, the themes, tone, and imagery present in the band’s fourth LP will forever link the album and the tragic event. On the 15th anniversary of the national tragedy, absent from the set were all the YHF songs that could have been associated with the moment. Maybe it was a move out of respect for the day, not wanting to trigger the sadness that those lyrics could raise. Or maybe it just never crossed the band’s minds. Either way, with only a pair of Yankee Hotel Foxtrot songs in tow (the album’s two biggest outliers, “Heavy Metal Drummer” and “Pot Kettle Black”), any 9/11 narrative that could have been tied to the performance was noticeably absent.

The set of shows tied into the release of Schmilco just a couple days prior, and Tweedy appeared to get pleasure just out of saying the new album title. Upon announcing “Nope” as a “Schmilco song”, he donned a look of self-satisfaction, the dad joke receiving its implied dad delivery. Otherwise, the band let the new tracks sit comfortably among the old. Opener “Normal American Kids” was performed with backing from only guitarist Nels Cline, whose work on the song is as precise, tense, and restrained as ever. “Cry All Day” is even more driving live than on the record, placing itself as another jewel in Wilco’s crown. Tweedy would go on to say that he thought Wilco was just now reaching its stride as a band, and the new material presented didn’t argue with that thought.

But as much as showcasing the new songs, there was also a feeling that Wilco wanted to nod to their history with this show. Posters from the band’s previous appearances at the venue could be seen on the walls upon entering, dating back to the 90’s. That longevity was present in the set, too, with the excellent John Stirratt-fronted “It’s Just That Simple” and the lovely Being There rarity “Say You Miss Me” serving as some of the night’s most memorable moments.

But as often as Wilco looked back, they would look forward. Standing on the rail was a 10-year-old fan that Tweedy took a quick liking to, noting that he’d seen her before on shows. And during “Hummingbird”, when the audience was asked to participate, he put the microphone right in front of the child’s face, the girl rising to the occasion in knowing all the words.

Wilco puts its money where its mouth is. For the first encore, the band set up in a countrified formation, including Cline on a lapsteel, Pat Sansone on banjo, and jazz guitarist Julian Lage coming in to guest on electric guitar. This allowed for faithful presentations of Mermaid Avenue standouts “Hesitating Beauty” and “California Stars” along with rearrangements of “A Shot in the Arm” and “Misunderstood”. Earlier, Loose Fur song “Laminated Cat” was performed as if it was one of the band’s most beloved hits. Everything was presented with reverence to Wilco’s career, as if to ask how anyone could ever argue one collection is better than another? Tweedy and his band want to celebrate their entire catalogue, and Wilco concerts serve as demonstrations of that idea’s worth. 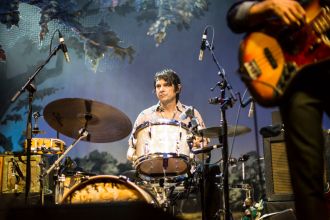 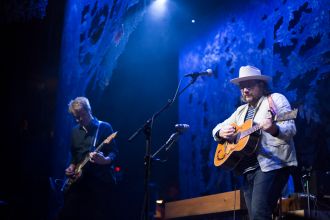 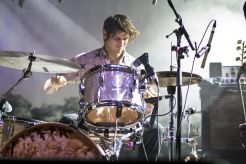 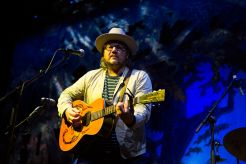 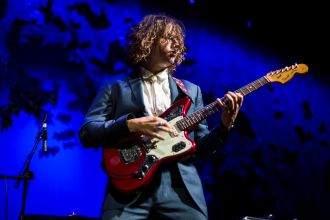 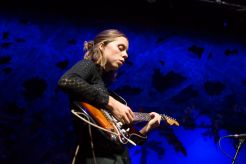 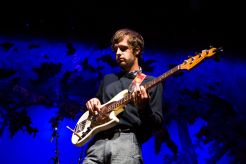 Live Review: Wilco at The Fillmore in San Francisco (9/11)