We’re closer than ever to Twin Peaks.

David Lynch’s highly anticipated revival over at Showtime bows on Sunday, May 21st, and it seems as if we’re being treated to one small gift by the network each and every day. Last week, the series opened an exciting installment at South by Southwest, featuring themed drinks, new swag, and an appearance by Special Agent Dale Cooper himself, star Kyle MacLachlan.

The publication sat down with Lynch and the cast for a full cover story, and even hooked up with People Magazine for a 40-minute reunion video with the stars that you can watch right now. If that we’re enough, GQ has an in-depth profile with the auteur, written by The A.V. Club’s own Sean O’Neal. So, yeah, plenty of goodies to go with your coffee this morning. 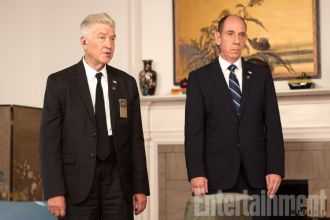