There are a lot of great parts to a Sigur Rós concert, but maybe the best are when something gets thrown. This could be when drummer Orri Páll Dýrason breaks a mallet during “E-Bow” and has to loft his useless twig to the stage floor, only to be handed a replacement tool by his tech. It could be when Dýrason concludes the massive “Festival” by spiking his drumstick to the ground, a fitting reaction to a song that literally sounds like a touchdown. Or when, to open the band’s heaviest song, “Kveikur”, he casts off his shirt like he was performing at Knotfest. Or it could be when bandleader Jónsi Birgisson wraps up his use for his bow on the evening’s closer, “Popplagið”, and tosses it over his shoulder like a chef that’s just spilled salt.

These are all overt gestures for a band that’s built on subtlety. Over the course of two hours at the Fox Theater in Pomona, the Icelandic post-rock legends took their time to weave lush, ethereal sounds for a captive crowd. Whether singing in Icelandic or their own made-up Hopelandic, meaning was derived and not explicitly stated. Any action that the band could offer outside the playing of instruments said a lot, even if it was just as simple as removing a t-shirt.

Sigur Rós have been touring as a three-piece since 2013’s Kveikur, with a trio of new songs in tow but no sign of a new album in sight. This particular run is leading up to a trio of performances with the LA Philharmonic as part of Reykjavík Festival, which will feature orchestral arrangements from Owen Pallett, Dan Deacon, and Nico Muhly among others. It’s the kind of magical evening that stings all the more because it happens to take place during Coachella weekend. But the shows leading up to it, including Monday night in Pomona, hardly felt like an afterthought.

How could it? Not only did the band plot a set with expert’s pace, using the first half to slowly build atmosphere while trotting out a parade of their best loved tunes after an intermission, but the visual presentation spared no expense. The trio stood surrounded by lighting rigs that provided spots, twinkles, drips, and baths of colorful light, all while backed by large projections. It was a spectacle worthy of arenas and festivals, loaded into a theater for a few thousand people. When songs would reach their peaks (and for Sigur Ros, often the climax of their music feels like its chief purpose, an inevitable “x” on their brand of calligraphic cartography), it wasn’t uncommon for the audience to throw their hands in the air, raise a fist, or open their palms to the sky. Indeed, the need to throw things was mutual. 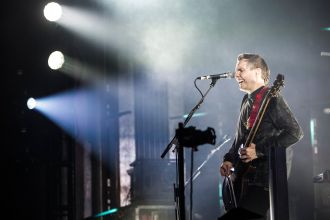 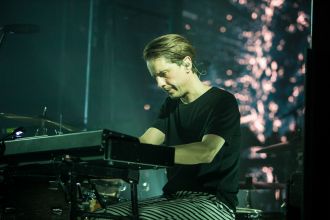 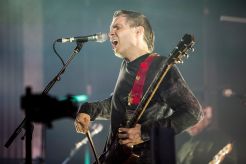 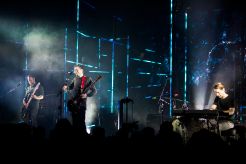 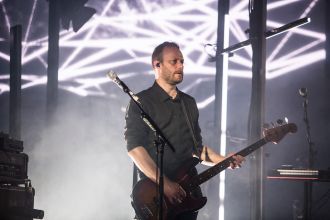 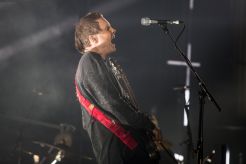 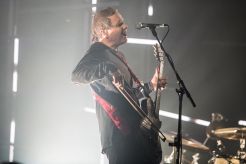 Live Review: Sigur Rós at the Fox Theater in Pomona (4/10)