Roger Waters debuted his new stage show for his upcoming “Us + Them Tour” at a public dress rehearsal last night at New Jersey’s Meadowlands Arena. The production was filled with stunning visuals, from prisms of pure light to a floating moon drone. During the Pink Floyd member’s performance of “Pigs (Three Different Ones)”, however, things took a pointedly political turn as Waters took Donald Trump to task.

For the second set, screens arranged to look like the factory on the Animals cover were lowered above the crowd as they displayed emasculating, mocking images of 45. The photoshopped pictures depicted the sitting POTUS in brightly colored lipstick, a Ku Klux Klan hood, as an actual pig, and wearing a dress. At one point, the dress was removed to reveal a tiny, almost hidden penis. Nearly every time the band called out the line, “Charade! Charade!”, an image of Trump was shown with the word plastered over his face. There was even an inflatable pig drone that flew around the arena with the words “Welcome to the Machine” next to an image of an enraged Trump shouting, “I won!”

As the 11-minuted song closed out, all the screens went black and began displaying some of Trump’s most infamous quotes. Things like, “This is more work than in my previous life. I thought it would be easier,” and, “You know, it really doesn’t matter what the media write as long as you’ve got a young, and beautiful piece of ass,” were shown in succession before the entire darkened stadium was lit up with one, bright-white message: “Fuck Trump.”

The whole thing was very similar to the video Waters released after inauguration day of him performing “Pigs” in Mexico City. Shots continued being fired as Waters went into “Money”, with images of Trump drowning in wealth being interspersed with other depictions of greed.

Waters has never been shy about making his political opinions known; he even approved plans to float pigs in front of Trump Tower in Chicago this summer. Still, such blatant exhibitions of distaste are likely to divide a few audiences on the “Us + Them” trek, and it did seem like some boos arose from the NJ crowd after the song (though perhaps they were aimed at Trump himself?). Political leanings aside, the set was something of a wonder to behold, and is sure to be one of the can’t-miss tours of the summer.

(Read: Ranking: Every Pink Floyd Album From Worst to Best)

With backup from Jess Wolfe and Holly Laessig of Lucius, Waters also used the rehearsal to debut a number of tracks from his forthcoming solo album, Is This the Life We Really Want?. In addition to previously revealed teaser tracks “The Last Refugee”, “Déjà Vu”, and “Smell the Roses”, Waters performed a brand new song called “Picture That”.

Check out photos from the show and video revealing Lucius’ highlight moment below, followed by the complete setlist. 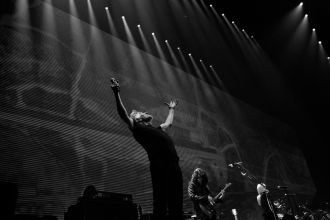 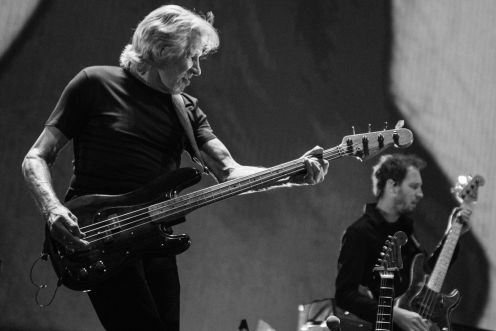