The less-than-stellar response to Everything Now springs in large part from the fact that Arcade Fire relied so much on satire and sarcasm, while they had so long been powered by sincerity. In a live show, cherry-picking the album’s best songs and placing them into the midst of the most revelatory of their whole career shows the heart at their core. Arcade Fire aren’t capable of putting on a live show without absolute passion and sincerity, and that glowed like a golden aura at their Lollapalooza-closing set. There’s an intoxicating density to their new songs, a depth of field that fits comfortably in with their catalog and stood shoulder-to-shoulder with just about every Arcade Fire favorite. Their live set now offers everything, now.

That cohesion and clarity shone through almost immediately, as they transitioned seamlessly between their new album’s title track and “Rebellion (Lies)”, one of their earliest anthems. This live experience feels like a never-ending fever dream of sing-along beauty, aided by the dozens of pastel balloons at the crowd’s front bouncing like popping corn. For continuous minutes at a time, restless keyboardist Will Butler, soulful violinist Sarah Neufeld, and passionate multi-instrumentalist Richard Reed Parry would glide into sound worlds of their own provision, and slowly morph, as if on an evolutionary timeline. Their best moments, like “No Cars Go“ and “Sprawl II (Mountains Beyond Mountains)“, steadily swell and collapse, shove and soar. By stretching songs past their usual time, they manage to shift one’s very sense of progression, where small changes in tone or volume or speed suddenly feel emphatic. 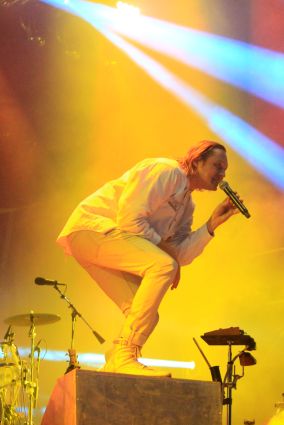 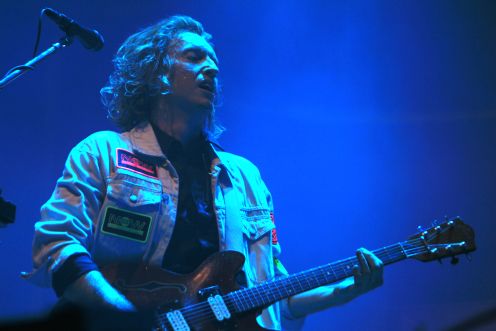 The setlist brimmed with heavy-hitters, eternally washing listeners in a flood of favorites from each album in the band’s catalog. A pulsating dose of Funeral songs led to cavorting sing-alongs; a couple apiece of Neon Bible and The Suburbs songs brought on the lose-your-shit-or-go-home-dance-moves; and the Reflektor songs obliterated the crowd. In that extended dynamics, the new songs hit much harder than they do on album. “Signs of Life” played like the slippery Talking Heads-indebted jam it deserves to be, logically followed by the Tom Tom Club-esque “Electric Blue” (complete with Régine Chassagne’s red leather-clad dance moves). Meanwhile, “Creature Comfort”, a song that comes off as cloying on album, rumbled and roared, the initial synth beat almost menacing, Chassagne’s keytar and spat vocal delivery surprisingly punk.

All of the Arcade Fire hallmarks appeared at some point during the night — violin lines that could summon back Thursday’s thunderstorm or conjure a worldwide spell; bent bass that could split the ground; hyperactive percussion that could crack at any second; soaring sing-alongs. The main set ended on the always explosive “Neighborhood #3 (Power Out)”, leaving only one song to remain: “Wake Up”. When the band returned for an encore after a brief break, the ultimate indie rock anthem that followed was predictable but as effective as ever. Still, Arcade Fire had one more trick up their sleeve, something that attendees at their aftershow the previous night got a taste of: a cover of John Lennon’s “Mind Games”. 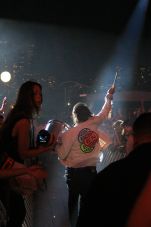 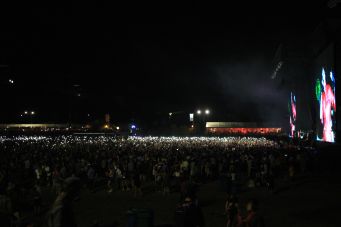 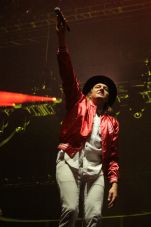 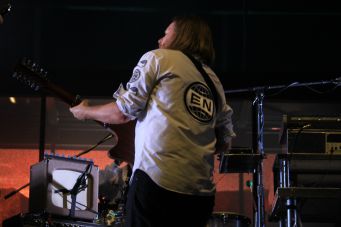 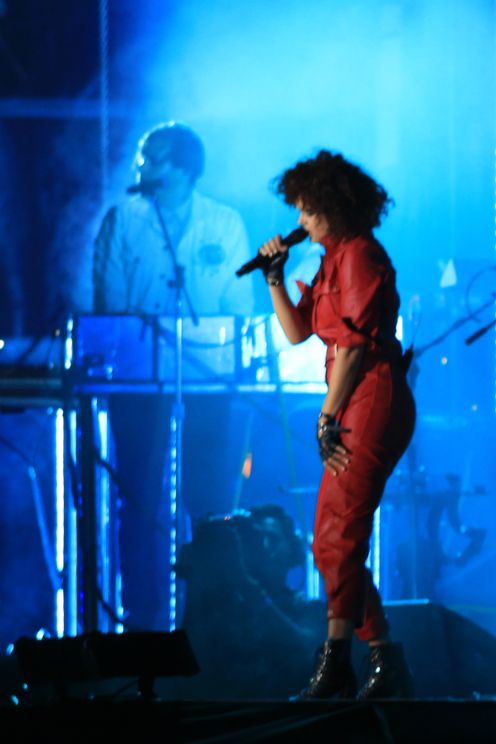 “There’s so much fucking poison in the air. We need love and peace, and we need it now,” Win Butler said as the band began the classic song. “We fucking love you so much, thank you for supporting the band.” The performance that followed was a picture-perfect distillation of the Beatles’ legendary call for clarity, love, and consideration — but with a twist. As the song drew to a close, the band interpolated pieces of Radiohead’s “Karma Police” and David Bowie’s “Oh You Pretty Things” (the latter of whom Win mourned, noting that “we’re all here because of David Bowie”), before returning to a snippet of their own “Wake Up”. It was an exhilarating moment, tying everything up together in a cathartic bow.

By the time I boarded the train to get back home, my head was still lifted somewhere over the park, the song ringing in my ears — but wait, that was just the half-dozen strangers who decided on an impromptu whistling rendition of the song. Tonight, Arcade Fire marveled aloud whether the enchantment of their decades-long magic works without the marketing campaigns, the costumes and papier-mâché heads, and the constant goodwill for new material. The answer: It does. 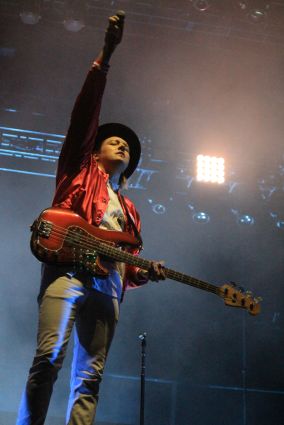 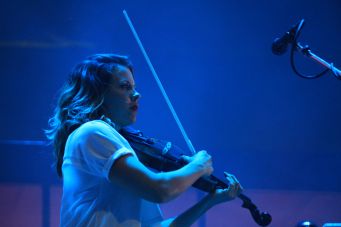 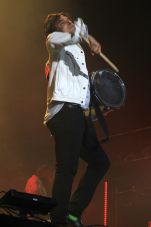 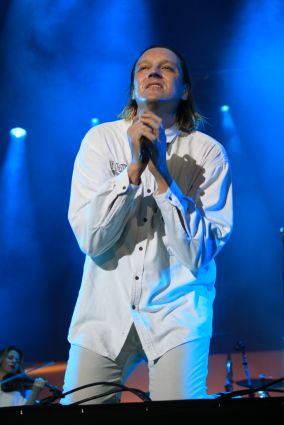 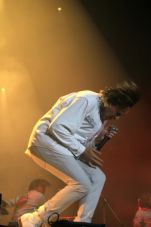 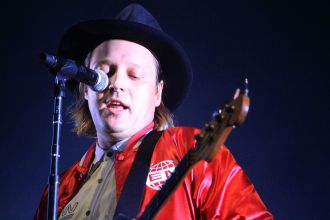 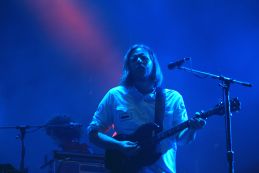 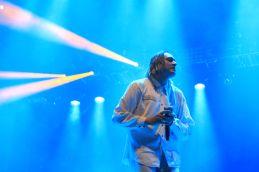 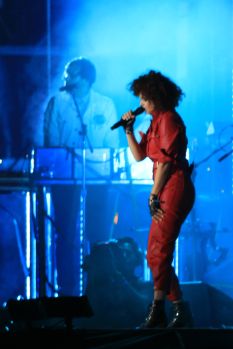 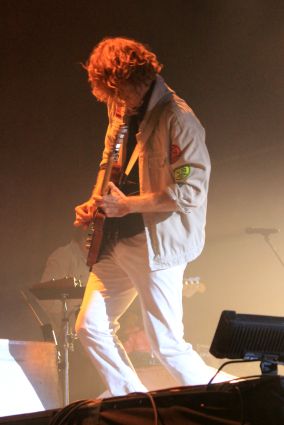 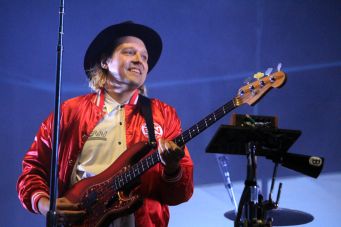 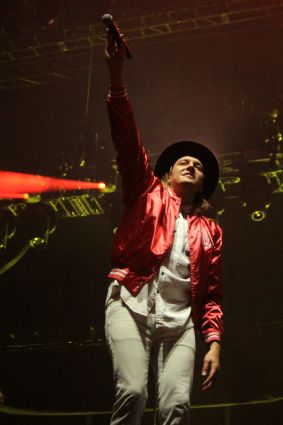 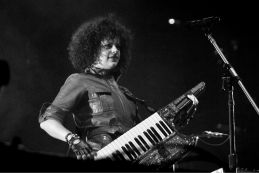 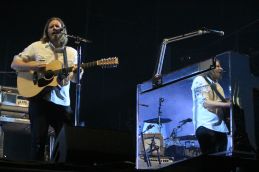 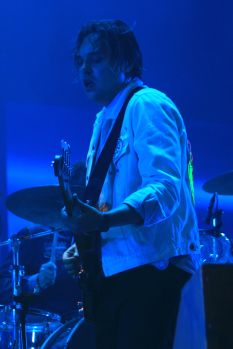 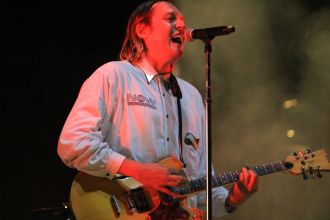 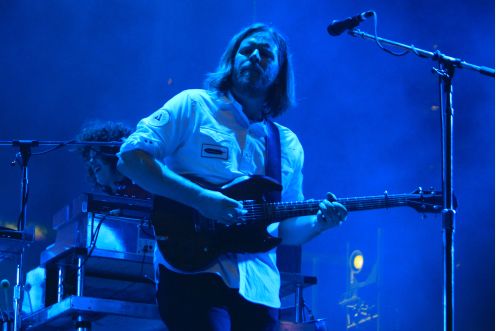