Every couple of years, a new film or TV show rehashes the themes most famously laid out in Joseph Conrad’s Heart of Darkness: the idea that when people are taken out of the rigid expectations of civilization, well, shit quickly hits the fan. Because human beings are pretty much assholes.

That’s essentially the starting point for writer-director Scott Frank’s new Western miniseries, Godless, a sultry look into one small New Mexico town amid the great 19th-century pursuit westward. But the town of La Belle isn’t altogether lawless – it’s just that circumstance have made these pioneers a little rough around the edges. Town outsider Alice (Michelle Dockery) might point a rifle at every unexpected visitor, but after she’s decided you’re harmless, she’ll certainly invite you in for coffee.

Things have been tough for the ladies of La Belle – and they are mostly ladies, as a mining accident swallowed the town’s male population in one tumultuous crash. But instead of falling into despair in New Mexico’s relentless heat, the ladies, led by the former mayor’s wife Mary Agnes (Merrit Wever), a no-nonsense, pants-wearing heroine, rally to take control of the town. They may not be taking full advantage of the coal mine’s potential, but, hey, they’re hanging in there. 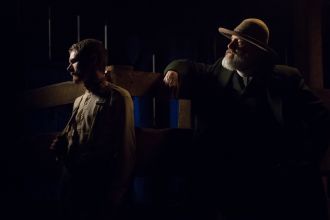 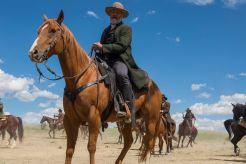 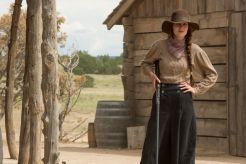 That’s until the town gets caught up in the regional drama – gangster Frank Griffin (a delightful Jeff Daniels) and his motley crew are scouring the western frontier for deserter Roy Goode (Jack O’Connell), a handsome sharpshooter he had once considered a son. Frank is not terribly unlike another psychopath we know, the recently departed Charles Manson. Frank finds his followers in society’s castaways. As a result, their bond is thick as blood. When someone leaves the clan … well, no one’s going to be leaving the clan. And rumor has it Roy is hiding in La Belle.

What makes Godless different from its thematic forefathers (Heart of Darkness, Apocalypse Now) or the typical tropes associated with the Western is the Netflix effort has a firmly 21st-century take on the Wild West. The premise that La Belle is a 19th-century town run by women is edgy enough, but then we have Mary Agnes not-so-secretly sleeping with the town prostitute (Callie Dunn), because you know what? Fuck it. People have needs. Another former prostitute is now the town school teacher. Slightly northwest from La Belle, a group of former slaves-turned-Union veterans have set up a modest attempt at the free life, making them just close enough for a good interracial side romance.

Ironically, the only place where the script feels cookie cutter is in the show’s primary plot: the feud between Frank and Roy. And disappointedly, although perhaps not surprisingly, this is where the show loses most of its steam. 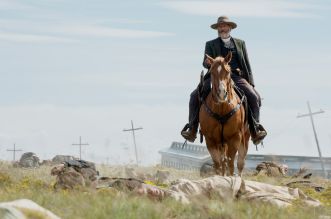 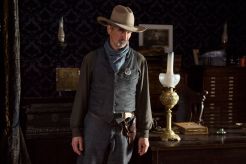 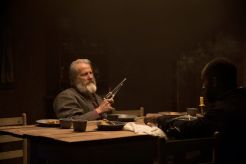 Godless, with its cinematic longshots of unfettered Western plains, a moody and effective soundtrack, and a phenomenal cast, seemed destined for greatness. But unfortunately, the town of La Belle isn’t just lawless — it’s also a bit aimless. The first few episodes set up this intriguing plotline: a 19th-century pioneering town led predominately by women. The tension rises when representatives from the Quicksilver Mining Company arrive and offer to buy out the mine — a proposition that Mary Agnes adamantly protests, but the other ladies, looking for some quick relief, are quick to accept.

The expectations are set: These greedy men are going to run the town into the ground. The women are going to discover their true strength. We’re all going to feel empowered by sunset. But Godless does something worse than offer a predictable plot: It completely abandons one. We never get to know what happens with the town’s economy because the middle episodes take an entirely different route, focusing instead on Roy’s troubled childhood via flashbacks. But since adult Roy has said very little up until this point—perhaps not his fault (Spoiler: Alice Fletcher shoots him in the throat in the first episode)—he’s not exactly the character we’re dying for four episodes of backstory on.

But the real problem is Roy’s flashbacks aren’t particularly interesting. It’s a tale we’ve heard before: orphaned boy finds a father figure, and the boy, in return, gives an unshakeable loyalty. 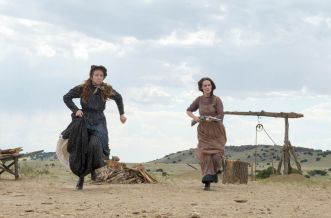 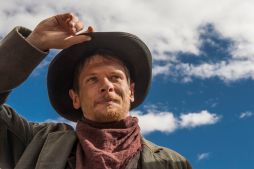 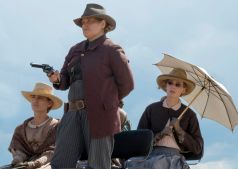 Perhaps the twist here is the bond does break. However, we never quite learn why. Maybe we’re supposed to just assume that Roy Goode found God—if not an actual cerebral figure, then at least the belief that he can do better, that he can be better. What confuses this explanation is that Frank doesn’t always come across as the stone-cold psychopath the local paper (which may exaggerate just a bit here and there) would have you believe. Sure, when you betray him, he’ll kill every man you’ve ever spoken to, but before provoked, he’s slow to pull a pistol. In a later episode, Daniels gives a richly complicated performance, crying at the side of one of the African American men bleeding to death as he says, “I had no quarrel with you.” He seems to have a certain set of ethics, however skewed they may be. And it’s hard to know if he doesn’t, in fact, feel true love for his band of misfits.

I have a rule for slow burners: If you eschew action for characters, those characters better be pretty damn good. Sometimes the acting rises above, but for the most part, Godless relies more on the white hat/black hat archetype than in fully letting us into the troubled minds of Frank and Roy. The few teases we get are oh-so-good, but they’re just that: teases.

And more frustratingly, the show abandons a perfectly intriguing premise (women running the business end of a small town) to focus on this tired plot of a cat-and-mouse chase spawned from hurt egos. For a show that seemed to go to some lengths to include undertold stories (along race, gender, and sexuality lines), it’s a bit tragic that the more interesting stories still get hidden by a couple of dudes that are quick with a pistol. As fun as it was to see some recognizable faces (particularly Sam Waterston as a U.S. Marshal), his storyline, like many others, turns out to be not altogether necessary. A few more cuts at the editing board would have helped pare down some of the tertiary storylines in favor of realizing one of the primary ones.

Maybe it’s the gamble you take with a Netflix show. The network is notorious for allowing its developers an unusual degree of freedom, but Godless never quite settles on where to throw the lasso.

Netflix’s Godless Gets Lost in the Wild Frontier