Setting the Stage: While Ozzy Osbourne has promised not to retire after this trek ends, his current road trip is being called No More Tours 2 for a good reason. The Prince of Darkness says this is it as far as extensive touring is concerned. He may play a one-off show here and there once this lengthy trek wraps up, but for many fans, this can be the last chance to catch the metal legend in concert.

On the drive in to the Northwell Health Theater at Jones Beach on Saturday (September 8th), things were looking iffy. A steady rain had been coming down for hours, and this is the same venue where a Marilyn Manson / Rob Zombie show had to be canceled due to flooding earlier this summer, and where the Five Finger Death Punch / Breaking Benjamin concert was plagued by stormy weather just a few nights ago. Thankfully, the rain turned into a drizzle as opening act Stone Sour took the stage, and the weather would mostly cooperate for the rest of the cool and damp night.

Taking the Stage: While you’d expect to see Osbourne’s backing band hit the stage and build up the momentum until his grand entrance, Ozzy himself came out first, greeting the crowd, and telling them the crazier they get, the longer he’ll remain onstage. Kicking things off with “Bark at the Moon”, Ozzy’s voice wavered a bit at first but a few songs in, the metal icon was in top form. From the get-go, it was evident there was something special about this tour. The stage backdrop is absolutely magnificent, highlighted by a giant cross made up of video screens. At times, it looked like an incredible medieval sculpture; at other times, it projected stunning imagery.

As great as Ozzy sounded, his backing band deserves as much praise. This is what a metal band should look like: the long-maned virtuoso Zakk Wylde back in the lineup where he rightfully belongs; the steady yet animated bassist Blasko holding down the low end; keyboardist Adam Wakeman adding extra atmosphere to the songs; and drummer Tommy Clufetos delivering a thunderous beat to Ozzy’s classics. And here’s the thing: Zakk’s got a custom Ozzy denim vest; Blasko’s sporting an Ozzy t-shirt — they look and feel the part, showing their fandom of Ozzy just as much as the thousands of fans in the sold-out venue.

Having just recently said farewell to the road with his band Black Sabbath, Ozzy’s solo hits made up the bulk of the setlist, including staples like “Mr. Crowley”, “Suicide Solution”, “No More Tears” and “Shot in the Dark”. But a little Sabbath crept in, as well, including “Fairies Wear Boots” and the epic “War Pigs”.

Wylde was given his own showcase during a portion of the concert that saw the Black Label Society frontman walking into the audience and playing a medley of songs, tossing the guitar behind his neck, hitting the strings with his teeth and just playing with a whole lot of talent overall. It was a good 20-minute portion of the show that concluded with a monster drum solo from Clufetos.

The main set closed out with Ozzy’s best known solo song, “Crazy Train”, complete with insane locomotive visuals on the video screens. But it wasn’t over yet, as Ozzy and company returned to the stage for his ballad “Mama, I’m Coming Home” and the scorching set-closer, Black Sabbath’s “Paranoid”.

We caught Slayer on their farewell tour at the same venue in late July, and now witnessing Ozzy on his last run, it’s great to see these veteran metal acts upping their game as they say goodbye to their adoring fans. They could have easily phoned it in and banked on the intrigue that a final tour brings, but each of these acts are performing at higher levels than they have in years.

Stellar Support: It’s not an easy task opening for Ozzy, but Corey Taylor and his band Stone Sour provided strong support. A headliner in their own right, Stone Sour got things started on this rainy evening with a high energy 10-song set, of which half the songs came from their latest album, 2017’s Hydrograd. Along with the hard-rocking new cuts, the band delivered their hit ballads “Bother” and “Through Glass”. Guitarist Josh Rand was seated while performing, with Taylor explaining that Rand blew out his knee at the beginning of the tour. The charismatic Taylor, sporting an Ozzy Osbourne shirt, expressed much respect for the Prince of Darkness throughout the set.

See fan-filmed video of Ozzy Osbourne at Jones Beach below, followed by pictures of Stone Sour (photo passes were not given out for Ozzy’s set).

Stone Sour Photos (click to enlarge and scroll through the gallery): 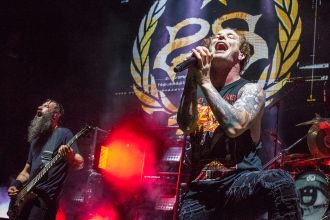 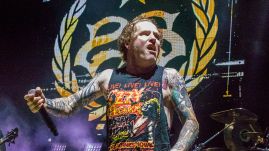 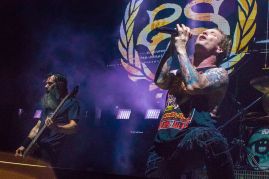 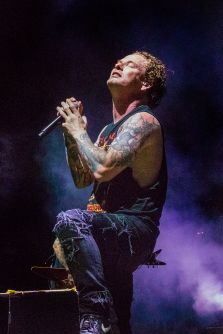 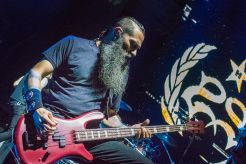 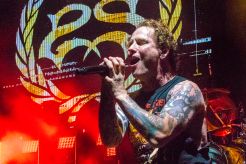 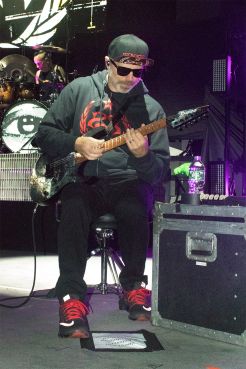 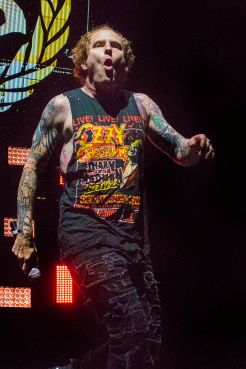 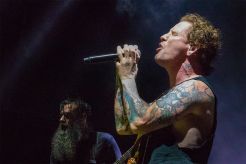 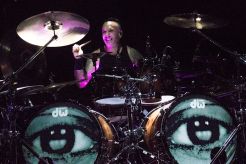 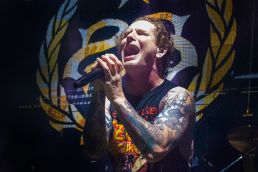