Setting the Stage: Heavy heads from every corner of the New York metal scene gathered on Thursday (March 28th) to witness Graveyard and Uncle Acid & The Deadbeats on Thursday at Brooklyn Steel. With both bands releasing new albums last year, the co-headlining tour touted one of the strongest current bills in stoner/psychedelic rock. This was a long awaited occasion for concertgoers, who were decked out in their finest metal attire — from vintage Melvins shirts to thrashed Bathory tanktops and battle jackets decked out in patches. There was denim and leather in abundance, along with much hair. A vastness of metal scenes was represented. The line for merch was 10-deep all night, and the “Peace Across the Wasteland” official tour shirt was already sold out before the show even started.

Of all the places to throw a heavy show in New York, Brooklyn Steel is literally among the most metal. It is a 1,800 capacity warehouse, gutted to include a stage and two bars, while retaining the minimalist industrial interior, emphasized by walls lined with welding masks and sheet metal. The sound mix is massive and the light show is a spectacle, which the bands used to their advantage.

Taking the Stage: English garage rockers Demob Happy opened the show, but the early 6 p.m. door time resulted in a small audience of people who’d only just arrived. The band’s energetic stage show and upbeat songs were played to a languid crowd who hadn’t drank enough beer yet. That would change. By the time Uncle Acid & The Deadbeats were set to go on, the venue was suddenly brimming. The atmosphere loosened, the room grew hazy with smoke and incense.

Uncle Acid began with Wasteland opener “I See Through You”, a psychedelic video-scape playing behind them. Guitarist-vocalist Kevin Starrs’ defiantly lo-fi recordings are integral to the mondo ’70s aesthetics of Uncle Acid’s records, but in the live setting, his impeccable riff craft is set free to be as loud and consuming as possible. Songs like the slow, doomy “Mt. Abraxas” and Blood Lust favorites “Death’s Door” and “I’ll Cut You Down” became huge slabs of Sabbathian riffage, the crowd headbanging in solidarity. This was why they came. Wasteland cuts “Shockwave City” and “No Return” became crushingly heavy compared to their album version counterparts, as occult imagery and horror scenes played on the giant screen behind the band, the stage lights turned low as if to simulate the atmosphere of an old cinema: the band providing the live soundtrack to their own twisted films.

The quintet’s musicianship was remarkable; they performed like a well-oiled heavy psych machine, locking into the methodical grooves that form each song. Their reputation as one of the best live acts in stoner rock precedes them — and for good reason. Starrs further proved his low-key shredder status as he slayed his many guitar solos, often with tasteful improvisation. The treble of his vocals, comparable to John Lennon fronting Black Sabbath, cut through the mix — finely carved by the sound engineer, considering the melodic nature of the band and the overall loudness. A man of few words, Starrs bid a sarcastic farewell: “We have one more song, then you can go back to your technology and your screens.” A plaintive and pretty guitar outro ended the set poetically.

It seemed daunting that Graveyard had to follow such a powerful act, but the Swedish rockers played like pros. Their heavy blues rang out with a calming vintage purr as the band touched singles from their latest album Peace (“Please Don’t”) and choice cuts from their discography (“Hisingen Blues”, “Birds of Paradise”, “Magnetic Shunk”). Renditions of the emotional “Uncomfortably Numb” and “Ain’t Fit to Live Here” were brought to life by the ragged, tour-worn vocals of Joakim Nilsson, evoking the howls of classic British blues rock bands like Quicksilver Messenger Service and Procol Harum. He sounded raw and raspy in a good way. His existentialist lyrics and strained vocals are the centerpiece of the band, and the extra grit didn’t detract.

Graveyard’s ability to delve into immersive psych jams, expanding on moments of anticipated improvisation during songs like “Hard Times Lovin’” and “Uncomfortably Numb”, balanced the otherwise tempered blues structures of their songs. Many likeminded blues rock acts veer into jam band territories, but Graveyard rely on dynamics that are just deliberate enough to ward off excessive noodling and reel it back in. Lead guitarist Jonatan Larocca-Ramm ripped plenty of solos on his Gibson SG: always within the given window of the song and with definitive purpose.

The band closed with the fan favorite “The Siren”, a brooding ballad that builds up and showcases the occasional Zeppelin-esque grandeur of Graveyard’s songcraft. It was a fitting climax to a night that brought the analog tones of heavy rock’s past into the present, where they remain a vital source of entertainment and escapism for those seeking salvation through the riff. From a glance at the crowd, it could have been the ’70s, ’80s, or ’90s inside Brooklyn Steel. A good riff is timeless, and between Graveyard and Uncle Acid, there’s plenty to go around. 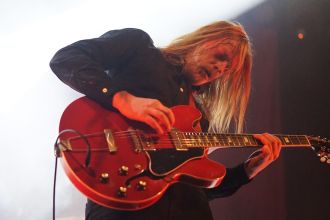 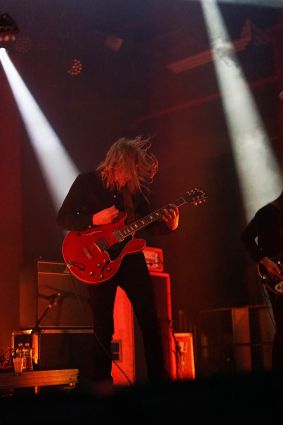 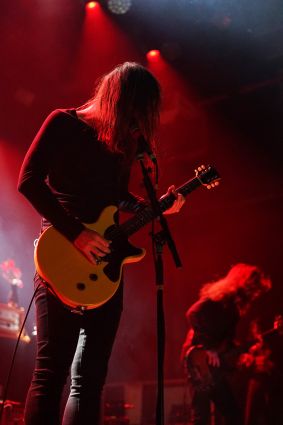 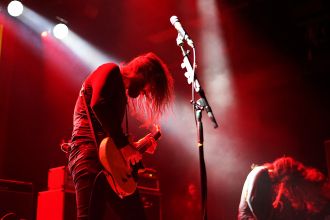