Setting the Stage: It’s been more than a quarter century since the physical world lost Frank Zappa, the experimental rocker whose avant-garde music was as trippy as it was innovative. Now, 25-plus years later, the late legend has rematerialized in “The Bizarre World of Frank Zappa” hologram tour, which kicked off last night at the Capitol Theatre in Port Chester, New York. With a collective hologram experience consisting mostly of Princess Leia telling Obi-Wan Kenobi he’s our only hope, fans filed into the venue with a high sense of curiosity. The technology for the Zappa tour was developed by Eyellusion, the same company that created the Ronnie James Dio hologram, which debuted a couple years ago and will embark on a US tour of its own late next month.

As press materials informed us, the audio for the Zappa hologram was culled from footage of a 1974 performance in which he turned his Los Angeles rehearsal space into a soundstage. For this tour, the hologram is joined by an impressive lineup of live musicians, including a number of past members of his band. The touring unit consists of guitarists Ray White and Mike Keneally, bassist Scott Thunes, multi-instrumentalist Robert Martin, percussionist Ed Mann, and drummer Joe Travers.

Taking the Stage: With a packed house and no opening act, the live band took the stage just after 8 p.m. Surrounded by video screens above and below them, they broke into a jam on “Cosmik Debris” off the 1974 Apostrophe (!) album. It wouldn’t take too long for the audience to witness the Frank Zappa hologram, which appeared a few minutes into the track, center stage, playing guitar and singing the words to the tune. At the end of the song, the Zappa hologram politely spoke to us, telling the crowd , “I’m as happy to see you guys as you are to see the show.”

Now, as far as the hologram is concerned, don’t expect it to jump out at you in some full-on 3D form. There is definitely a three-dimensionality to the hologram, but it’s set back on a screen with movements that are more side to side than front to back. It’s still pretty cool, but it’s not, by any means, a mind-blowing, CGI-looking Frank Zappa that comes face-to-face with the front of the audience.

What the audience also found out pretty soon was that the hologram is just one element of a much grander multimedia show, appearing occasionally throughout the concert rather than during the entire gig. The second song of the night, “Montana”, featured an animated line drawing of Zappa, while the next tune, “More Trouble Every Day”, was accompanied by newspaper headlines and animation depicting Martin Luther King Jr., police brutality, and school shootings, along with archival video of Zappa.

Following a humorous cartoon animation during the song “Penguin in Bondage”, the hologram would reappear (almost 40 minutes since first materializing) for an extended jam session.

Throughout the night, the live band members would take to the mic to convey their gratitude and awe at having the opportunity to play these songs again, with the emotion clearly showing on their faces.

More animation and video footage would follow in the next handful of songs, with some of the imagery having a Wes Anderson vibe to it. And then a fun highlight came when a disco-dressed-action-figure-looking Zappa hologram sang and danced along to “Dinah-Moe Humm”, accompanied by two backing dancers.

It was after that tune that Frank’s son Ahmet Zappa took the stage to express his gratitude to the band and the fans, saying that it was true magic that his father was cosmically back onstage. But Ahmet wasn’t just there to speak. He also delivered a couple of Vegas lounge-like performances of “My Guitar Wants to Kill Your Mama” and “Dead Girls of London”, dancing like a madman, and cracking one-liners about the band members along the way. It was a little bizarre, and maybe a little out of place, but then again, the word “bizarre” is in the name of the tour.

After Ahmet’s exit, the Frank hologram would close out the main set with “Dirty Love”, only to return minutes later in hot-dog form for the first song of the encore, “Cheepnis”. The night ended with hologram Frank and the band playing the classic “Camarillo Brillo”, after which virtual Frank told the crowd, “Thanks a lot, you’ve been a real nice audience. Good night!”

Ahmet returned to bring the band members to the front of the stage for a final bow, closing the figurative curtain on a truly trippy evening of entertainment. Fans less familiar with Frank Zappa may walk away unsure of what they just saw, but diehards will truly appreciate the musicianship of the band and the attention to detail that the creators put into this show to capture the talent and quirkiness of an extraordinary and innovative individual. 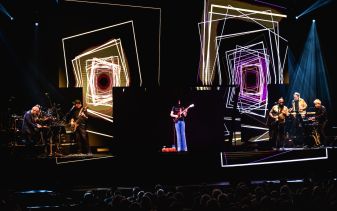 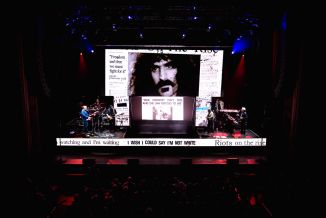 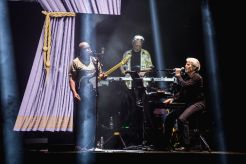 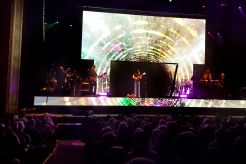 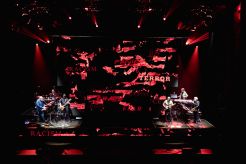 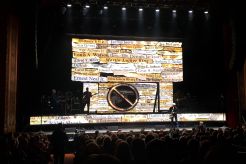 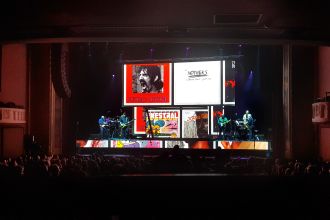 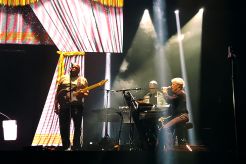 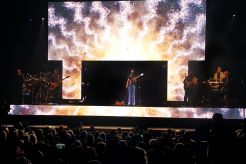 Live Review: The Frank Zappa Hologram Tour Is as Trippy as the Man Himself (4/19)