Setting the Stage: Brooklyn is home to many shows on a nightly basis, but few can compare to Sunn O))) and their sonic immersion. Under the banner of their new album, Life Metal, the monolithic drone band brought its visceral stage show to Brooklyn Steel on Thursday (April 25th), turning the warehouse-turned-venue into a fog-filled den of feedback and wrenching frequencies.

Taking the Stage: David Pajo of Slint opened the show under his Papa M moniker, playing the mysterious looped drones and meditative folk he’s released under that name. The stage lights were entirely dim with only a single illuminated light bulb placed on his amp. He faced stage left, lost in song, a melancholy tone emanating from his guitar. He occasionally touched the pedals at his feet, changing an effect or triggering a drum machine loop. Meanwhile, the audience filtered into the room. Pajo’s performance was cathartic — grounded in freeform expression rather than arbitrary structures or tropes.

Sunn O))) carried that ethos. They are a rare band that has attracted fans of extreme metal, experimental music, and general novelty, creating a huge contingent of followers and curious parties eager to witness the absurd. The band eschews song structures, melodies, drum percussion, and accepted volume levels, creating an experience that threatens the senses. It’s not a party or even a typical music concert; rather, an experience in sound, as frequencies rock and tremble your skin and inner organs.

That’s the level of volume Sunn achieved. Your eyeballs vibrated. Your innards quaked. The room was filled with smoke as fog machines relentlessly puffed plumes into the room. Only the cloaked silhouettes of Greg Anderson and Stephen O’Malley were visible when the fog parted enough to reveal the stage and its contents, each member of Sunn surrounded by a semi-circle of amplifiers and bass cabinets. The band’s on-stage setlist, much like their drifting soundscapes, didn’t have songs but musical keys (C>G#>A#, etc.) — keys in which to drone. And drone they did.

Nobody in the audience moved except for the occasional raised devil horns from someone who felt the need to express their gratitude for the heaviness at hand. After 20 minutes of controlled guitar feedback, keyboard and organ were introduced, serving a more prominent role in the set than in previous tours — especially considering the absence of vocalist Attila Csihar. A consistent contributor to the band’s work, the fact that Csihar never appeared was the only disappointment during the set. Instead, the organ and tastefully subdued trombone balanced the band’s otherwise dominating low frequencies.

But all of these descriptions and words paled in comparison to the immersion of the experience, which occurred on a more physical, durational level.  For two whole hours, the band held sway without a break in the sonic endurance. Even outside the venue space, the drone could be heard and definitely felt. The function of Sunn’s music is apparent but amorphous: Some stood in therapeutic meditation, some held up their phone, documenting the phenomenon, others gave up, leaving halfway through (I witnessed waves of people go through the no-reentry exit at the one hour mark). A particularly noteworthy couple of fans (standing next to me) achieved bliss by applying THC salve to their pressure points and doing Yoga-esque exercises during the set.

To even describe it as a “set” feels weird. It wasn’t a normal concert in that concept. Not a discernible catchy riff was played, yet it was heavy and eternally metal. If there was a melody, it was smothered in low-end; still, the event was well attended and at a high-end venue in Brooklyn, proving that the truly bizarre and irreverent can enchant on a commercial level. The crowd cheered in reverence as the band hoisted their guitars during the final chord, the show drawing to a cinematic conclusion as the fog parted, the lights raised, and the hooded silhouettes revealed themselves not as mysterious monks of feedback, but real men who had just gone on the same sound journey as their audience. O’Malley even cracked a thin smile beneath his hood, reconciling the otherworldly experience with a grounding moment of poignant human emotion. 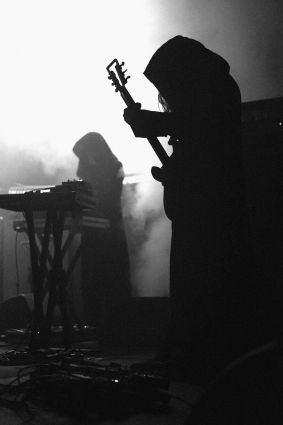 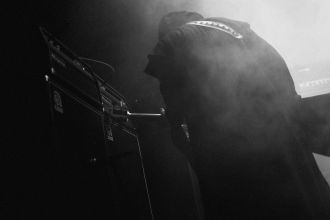 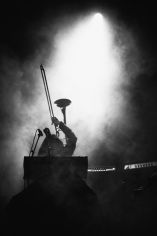 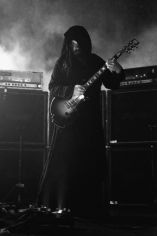 All photos by Jon Hadusek