Setting the Stage: The cold rain didn’t deter New York City’s punk and metal underground from catching the second of two sold-out headlining shows by Eyehategod at The Kingsland on Sunday night (May 12th). A pizza joint/dive with a crusty concert space in the back, the venue was an ideal spot for the loaded bill including hardcore legends Negative Approach, New York heavies Sheer Terror and Disassociate, and grindcore punks Phobia.

Situated at the top of Brooklyn among Greenpoint’s eerie, isolated warehouses, it also serves as a centralized and vital location for the local metal scene. Like the nearby Saint Vitus Bar, Kingsland’s extreme music shows are more accessible to the many who travel from Queens. Next to the venue runs the Newtown Creek, the epicenter of the notorious Greenpoint oil spill, in which over 17 million US gallons of crude oil seeped into the soil over years of haphazard processing. It was only fitting that Eyehategod bring their NOLA sludge metal to such a locale.

Taking the Stage: NYC purveyors of grind Disassociate opened the show early in the evening, startling the early arrivals, who stood some distance from the stage, perhaps still sleepy from the rainy day. The only one in the crowd with the energy to match the intensity of their music was a noticeably intoxicated Shane McLachlan of Phobia, who paraded in front of the stage in his own circle pit, a drink in hand. “We’ve been on tour with this drunk motherf*cker right here,” frontman Ralphy Boy said while giving McLachlan a loving pat on the head. “We’ve been doing some things I thought I had stopped doing years ago.”

By the time Phobia came on, McLachlan was a wild card, his pants falling down during soundcheck. But he held it together, only falling over one time while still managing to not spill the PBR in his left hand. He finished the song on his knees. The set was shambly in an endearing rock ‘n roll fashion and not the tightest Phobia performance in their long history, but entertaining nonetheless.

The majority of the sold-out audience arrived in the moments before Sheer Terror took the stage. Beloved staples of the New York hardcore punk scene in the ’80s and ’90s, there was a large local contingent here expressly for this set. With a hints of Celtic Frost and the postmodern anger and melancholy of Rev. Paul Bearer’s lyrics — which evoke the NYC of old — there’s nothing quite like Sheer Terror. The band put on a masterclass of metal-inspired street punk, playing fan favorites like “Here to Stay” and “Just Can’t Hate Enough”. Paul’s candor and charisma flavored his stage banter. “Lovely March weather we’re having,” he said. “Thanks for coming on such a shitty day.”

For those who’d been there since the first act, the show was turning into a marathon. A lot of beer was consumed, and many shoved down pizza slices to maintain for the duration. The crowd’s temperament turned volatile by the time Negative Approach went on, and circle pit quickly broke out. Photographers in the front guarded their backs and gear as moshers crashed around to a retrospective of the Detroit hardcore band’s infamous catalog, including cuts like “Tied Down” and “Nothing” (one of the many tracks from the 1982 self-titled 7” that the band played). Frontman John Brannon wore a permanent scowl, thrusting the microphone into the crowd as drunk punks shouted his choruses back at him.

An atmosphere of chaos permeated the venue by the end of the night. The combination of bodies and the collective merch from the five bands made it nearly impossible to move in the bar area, and when Eyehategod started, the disarray took over the concert space. Seasoned, worldly performers, the NOLA band has seen its share of scuzz and sordidness — often partaking in it — and gave the crowd a fitting set of filthy punk and doom metal that spanned their entire career and recorded output.

“We don’t have a setlist,” vocalist Mike Williams admitted. “We’re just making this shit up as we go.” Faster songs such as the hardcore “Agitation! Propoganda!” came early in the set, setting moshers into motion. A kid in the frontline barreled into the mic, hitting Williams in the face. Unfazed, he placed the mic back on the stand, shook his head with a wry smile, and continued. Any photographers dispersed, giving full reign to the physicality in the front row.

As the set progressed and the moshers grew tired, Eyehategod delved into its patented sludge metal. The inescapable grooves of “Parish Motel Sickness” and “Medicine Noose” were airtight and crushing, the audience nodding and swaying to guitarist Jimmy Bower’s Sabbath-ian riffs. So versed in their own material, the band even started taking requests, the crowd shouting titles at Williams: “Blank! Sisterf*cker! Kill Your Boss!” All three Take As Needed for Pain tracks were played, the latter closing a set that was definitively Eyehategod: vast in tempos, thick with vitriol, and delightfully debauched.

Photos of Eyehategod, Negative Approach, Sheer Terror, Phobia and Disassociate in Brooklyn (click to enlarge and scroll through): 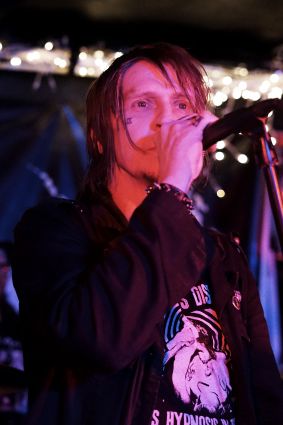 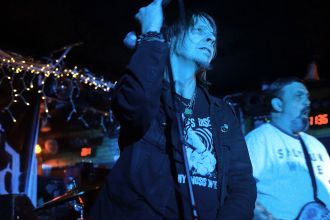 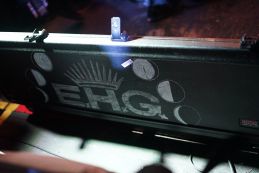 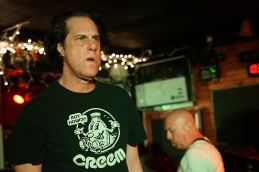 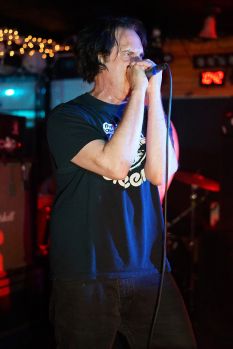 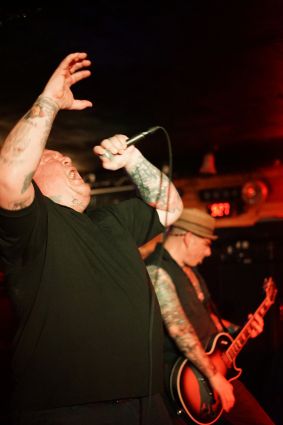 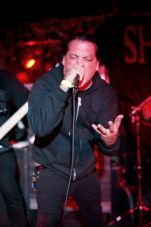 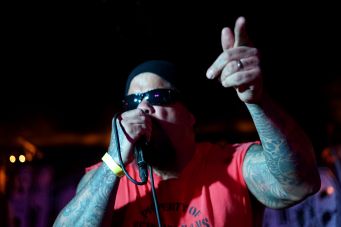 All photos by Jon Hadusek

Eyehategod Setlist:
Lack of Almost Everything
Jack Ass in the Will of God
Parish Motel Sickness
Blank / Shoplift
Nobody Told Me
Agitation! Propaganda!
Sisterfucker (Part I)
Sisterfucker (Part II)
Medicine Noose
Three Black Eyes
Take As Needed For Pain
New Orleans is the New Vietnam
Peace Thru War (Thru Peace and War)
Methamphetamine
Kill Your Boss