Setting the Stage: Metalheads from across the tri-state area gathered in reverence for an unprecedented bill on Friday at the Playstation Theater in Times Square. Never before have thrash legends Overkill and Death Angel toured together, and if that pairing wasn’t enough to sell the faithful, Brooklyn’s Life of Agony joined the fun for this night only, a callback to their 1992 tour with Overkill.

The atmosphere was that of an old-school metal party, with Overkill’s New Jersey appeal making it a regional takeover. As one of the definitive East Coast thrash metal bands, a scene dominated by West Coast bands during the genre’s pioneering era, Overkill is the thrash band these people grew up with. Many were wearing Overkill shirts from tour’s past, a select few proudly touting vintage cloth from The Years of Decay and Horrorscope tours, proving their devoutness to the band.

Taking the Stage: Texas heavies Mothership opened with a short set of grooving stoner metal, returning to New York after playing a stacked show with Crowbar and Corrosion of Conformity a few months ago. The show’s early 6 p.m. start and a sluggish Will Call line (that stretched down the block) resulted in a small crowd for the worthy trio, which is poised to breakout after another high profile support slot.

Also technically listed as a “special guest”, Death Angel had all the trappings of the main attraction, and the fact that they were in a support role — playing a shortened set so early in the night — seemed unjust. Such is the nature of having a stacked bill of regional heavyweights. The Bay Area quintet had to bite the bullet, but they made the most of their 40 minutes, delivering an airtight set of vitriolic thrash in the old-school vein.

A circle pit broke out as the band opened with “Thrown to the Wolves”, frontman Mark Osegueda scowling as he snarled out his words. He worked the stage from left to right, leaning on lead guitarist Rob Cavestany as he ripped off shredding solos. Osegueda ended the song with a scream of superhuman duration. If anyone was curious if Death Angel had lost any of their aggression of the years, they were quickly insulted with a violent performance. “Physically remind me where the f*ck I am?” Osegueda beseeched to the moshers, inciting the pit once more before the band ran through Act III centerpiece “Seemingly Endless Time”.

Death Angel’s old material lined up nicely with recent compositions like “The Dream Calls for Blood” and the title track from their forthcoming album Humanicide, which emphasize the band’s knack for balancing precise thrash riffage with prog-like turnarounds and groove hooks. The song structures have a sense of motion and variation that makes them infectious to follow from both a musician’s perspective, for its inspired compositional balance, and from the crowd, who can thrash around in tandem with the breakdowns and sheer speed.

This shared experience was most palpable for the band’s final number, a medley of their instrumental thrash opus “The Ultra-Violence” and the metal anthem “Kill As One”. Perhaps it was the short set length or the band’s undesirable support slot that fed their rage, but the performance had a noticeably angry urgency to it. “Good night New York, or rather, good afternoon,” Osegueda said in a sarcastic nod of farewell. “Thanks for coming out so early. We’re Death Angel from the Bay Area, and we play thrash-f*cking-metal.”

Life of Agony presented a change in style, though their set was just as thrilling. The band’s legacy in the New York heavy music scene was cemented with beloved albums like 1993’s River Runs Red, which combined doom, hardcore, and groove metal into a bitter concoction of emotionally wrought alt rock. As a young band, Life of Agony toured with Overkill in 1992, which served as a momentous occasion in their career. It was fitting that they co-headlined this evening in a reimagining of the ’92 bill.

Tracks from River Runs Red (“This Time”, “Underground”) highlighted the set with their hazy tempo changes and anthemic chorus hooks, which the crowd shouted back at singer Mina Caputo in call-and-response. “Thank you for supporting live music,” she exclaimed between songs. “They’re trying to take it all away from us, trying to replace us with holograms. But that’s f*cking bullshit.” She was a charismatic presence, tightroping across the stage monitors and expressively guiding the band’s stage show, slinging water bottles into the sweaty pit of shirtless thrashers.

The break before Overkill served as a needed moment of rest and hydration. The aforementioned thrashers sat on the ground in the lobby. Some were laid out their backs, passed out or exhausted. Others killed time playing Mortal Kombat on the PS4 consoles installed in the walls. Meanwhile, the stage was adorned with alien UFO imagery from Overkill’s latest album, The Wings of War. Iron Maiden played over the house system to get the crowd hyped for the impending clinic of thrash.

Overkill opened with “Last Man Standing”, sentiments the thrashers took quite literally. Anyone in the center of the floor was engulfed in a tornado of bodies. Bobby “Blitz” Ellsworth presided over the manic action below, one boot on the monitors, in a venerable frontman pose, holding the mic stand as he howled his unmistakable howls. “Rule number one: I’m in charge,” he proclaimed before taking fans back to 1989: “Long ago and far away, the record was called The Years of Decay.”

The “hit” in the band’s catalog, “Elimination”, came early in the set and was gloriously heavy and fast, much to the delight of the mosh. “Damn New York, you’re making me feel 59 again,” joked Blitz, who just turned 60 on May 3rd. He was in a carefree mood the entire night, thriving off the hometown love in the building (“Dirty Jersey, I could smell you when I walked in!”). The band was tight and also in good spirits, shedding many smiles while they crushed songs new (“Distortion”, “Mean Green Killing Machine”) and old (“Deny the Cross”, “Feel the Fire”). Bassist and founding member D.D. Verni — “An old-school motherf*cker,” per Blitz’ introduction — got a bass solo in the middle of the set, giving his bandmates a break. Otherwise Overkill played with unrelenting volume and intensity.

The night of metal came to a close with a warm moment from Blitz. “My mom said, ‘Bobby, I want you do what you love to do, and I want you to do it with people who love to do it with you.’” He acknowledged the packed theatre (“That’s you!”) and his fellow shredders in Overkill. The closing encore of the band’s signature cover of the Subhumans’ “F*ck You” and “Welcome to the Garden State” was a suitably absurd and symbolic end to the show, with Blitz and the crowd hoisting their middle fingers in solidarity. 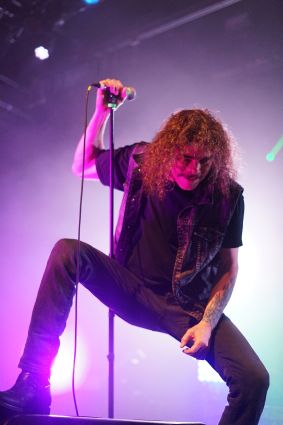 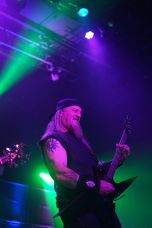 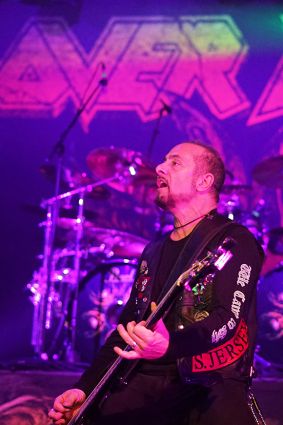 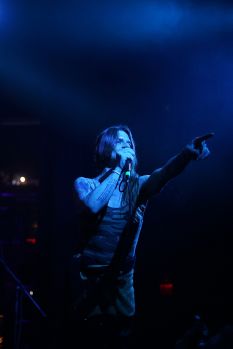 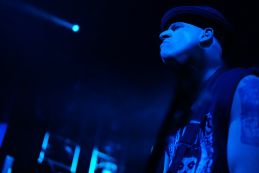 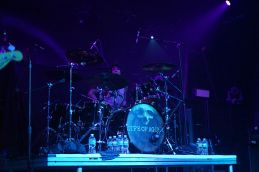 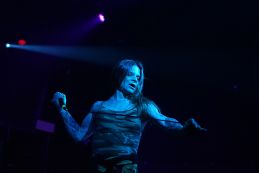 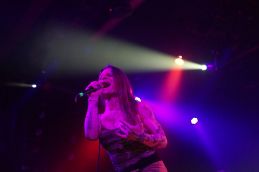 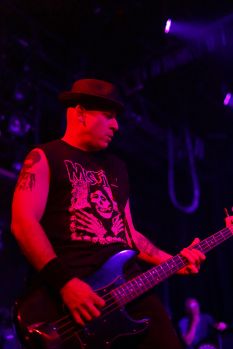 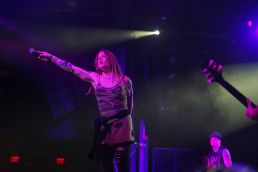 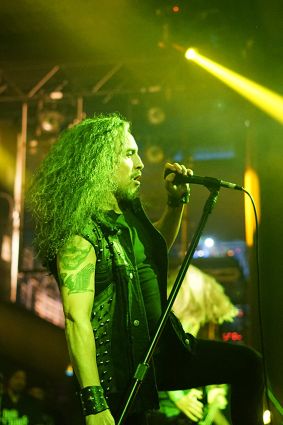 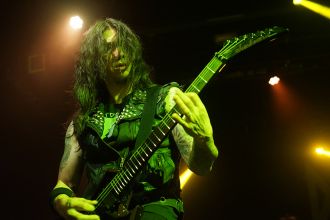 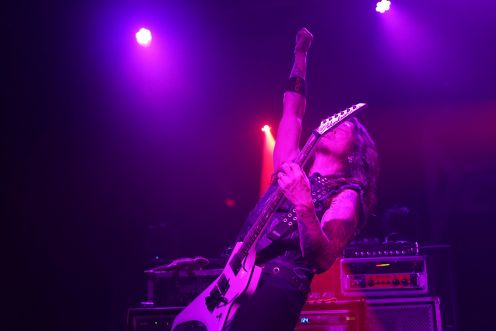 All photos by Laura Miles Dresser

Life of Agony setlist:
My Eyes
Through and Through
Otherside
This Time
Lost at 22
Weeds
Damned If I Do
Bad Seed
Empty Hole
Method of Groove
Underground
River Runs Red

Death Angel setlist:
Thrown to the Wolves
Claws in So Deep
Seemingly Endless Time
The Dream Calls for Blood
The Moth
Humanicide
The Ultra-Violence / Kill as One