Setting the Stage: A legion of black-shirted metalheads flooded the streets outside of Barclays Center on Saturday evening, descending on the arena for the second of two Brooklyn shows on Iron Maiden’s “Legacy of the Beast Tour”. Maiden shirts could be spotted on the subway and in adjacent bars and delis, everyone repping past Maiden shows attended. For the band’s most devout fans, seeing the iconic group is a mandatory metal pilgrimage, and many came for both nights, wearing the 2019 tour shirts they acquired on Friday. And for no band is the T-shirt more important than with Iron Maiden, as proven by the massive wall of shirts at the band’s official merch table, not to mention the swarms of bootleggers selling parking-lot knock-offs outside.

“The Legacy of the Beast Tour” has been touted as the legendary British metal band’s biggest production yet, and it certainly lived up to its billing, featuring an array of stage pieces and backdrops that visually brought Iron Maiden’s songs to life on the stage, not unlike a drama or play. After an opening set from metalcore act The Raven Age, which features Iron Maiden bassist Steve Harris’ son George Harris, the lights dimmed and a low rumble signaled the Beast’s arrival. UFO’s “Doctor Doctor” blared as the opening hype track, rousing those in the floor pit who pumped their fist to shouts of “Mai-den! Mai-den!” Two stage hands dressed as military officers appeared stage right and left, removing the tarps covering the amps and monitors, which were draped in camouflage netting. The lights went dark and three lights hovered above the stage mysteriously.

Taking the Stage: Quite literally launching into the intro of “Aces High”, the band finally emerged beneath a hovering airplane bomber as frontman Bruce Dickinson, clad in vintage flight cap and goggles, darted around the stage, dodging the floating plane as he sang. Every song in the set featured a different set piece or backdrop, the plane being one of the most elaborate — it even had a working propeller. Between songs Dickinson ran backstage for a costume change, wearing a white parka in a snow scene for “Where Eagles Dare” and donning an old-school denim vest for a thrashed up version of “2 Minutes to Midnight”.

The setlist and theme for the tour is a retrospective of Iron Maiden’s discography, with the band playing many of their most celebrated songs and a couple surprises. Many adoring fans shouted every lyric back at Dickinson throughout the night as Barclays turned into an echoing choir. In Dickinson’s only monologue, he offered his two-cents and remarks of surprise at the audience’s fervor. “We had 14,000 in here last night and there’s nearly 14,000 in here tonight,” he said. “Is there some rap band playing Barclays tonight? Heavy metal in 21st century, f**king hell. Somebody better tell the media. Actually, f**k the media.” The crowd particularly enjoyed the last remark. “One day there will be new Iron Maiden songs, but today is not that day. We’re here to celebrate. Go f**king nuts!”

Blaze Bayley-era track “The Clansman” (a staple in prior setlists) was followed by the band’s classic “The Trooper”, as guitarists Dave Murray, Janick Gers, and Adrian Smith nailed the iconic opening riff in unison. A stilted Eddie in British red coat took the stage wielding a sword, so Dickinson grabbed a blade of his own and the two engaged in a brief duel before the singer ran to the second level of the stage above drummer Nicko McBrain. In a humorous moment, Dickinson pointed his sword at Eddie, who busted out some air guitar during the solo. Every song featured these charming and campy moments, proof that Iron Maiden are taking this elaborate production seriously, but not too seriously.

The middle of the set saw the band bring out some deep cuts, including “Revelations” (against a beautiful cathedral backdrop), another Bayley-era song “Sign of the Cross” (to a darkened graveyard setting), and Brave New World’s “The Wicker Man”. Sadly nothing from Somewhere in Time or Killers made the cut, but the rousing finale of hits more than made up for it.

Stage left during “Flight of Icarus”, Gers shimmied and danced around as he played, projecting a classic ’80s metal guitar attitude that balanced nicely alongside the more workmanlike performances of Harris, Smith, and the seismic and calculated drumming of McBrain (meanwhile, Dickinson ran around with an actual backpack flamethrower, spraying flames from both arms). The dynamic “Fear of the Dark” sounded particularly massive and dense before the stage lit up with fire and a hellacious burning pit backdrop for “The Number of the Beast”. Even by Iron Maiden standards, the stage piece looked convincingly evil.

The titular “Iron Maiden” was the only Paul Di’Anno-era song played, closing the initial setlist before the band returned for a three-song encore, where they finally hit Seventh Son of a Seventh Son for the staple “The Evil That Men Do” and gave Brooklyn the ultimate one-two ending of “Hallowed Be Thy Name” — rendered beautifully by an visibly exhausted Dickinson — and the anthemic “Run to the Hills”. Nobody was in their seats, the crowd shouting the chorus in euphoria, concluding a joyous night that saw Iron Maiden re-imagine its stage show into a full-blown visual feast while giving fans a no-filler set of career-spanning hits, worthy of such a legacy.

Photo Gallery – Iron Maiden and The Raven Age at Brooklyn’s Barclays Center (click to enlarge and scroll through): 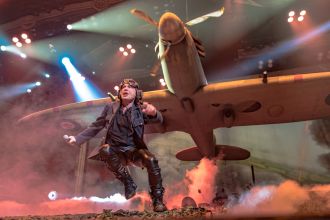 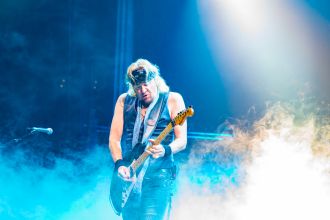 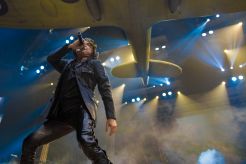 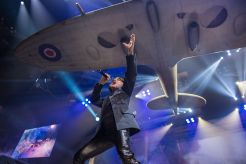 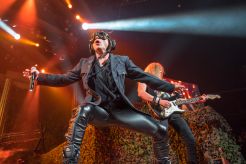 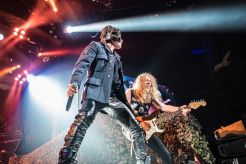 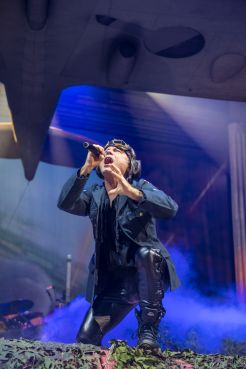 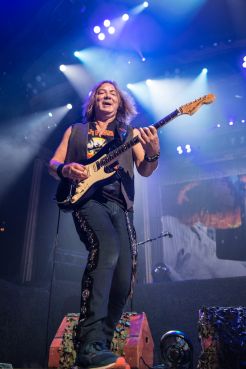 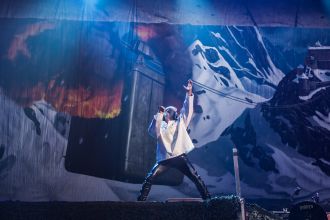 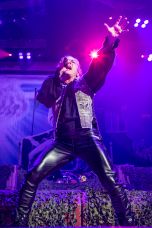 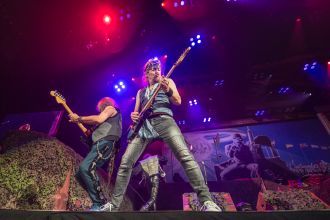 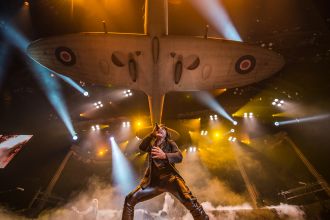 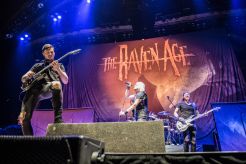 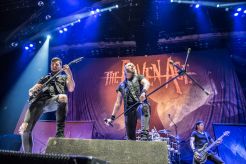 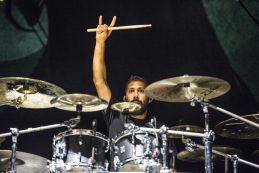 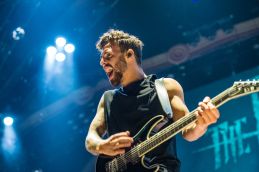 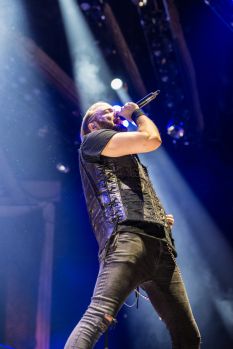 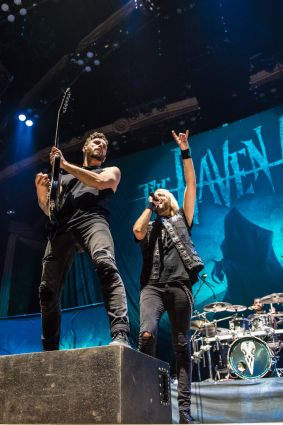 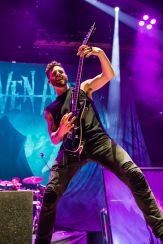 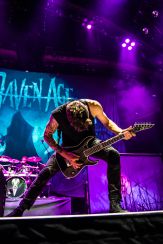 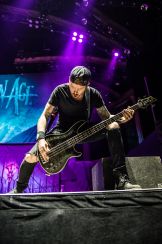 Iron Maiden Setlist:
Doctor Doctor
Churchill’s Speech
Aces High
Where Eagles Dare
2 Minutes to Midnight
The Clansman
The Trooper
Revelations
For the Greater Good of God
The Wicker Man
Sign of the Cross
Flight of Icarus
Fear of the Dark
The Number of the Beast
Iron Maiden

Encore:
The Evil That Men Do
Hallowed Be Thy Name
Run to the Hills