Setting the Stage: When Mr. Bungle announced last year that they’d be playing their first shows in 20 years this winter, the excitement was palpable. The experimental band led by Faith No More singer Mike Patton developed a devoted following with a series of demos in the ’80s and three major-label studio albums in the ’90s. Adding to the appeal of this tour is that the lineup of three core Mr. Bungle members — Patton, guitarist Trey Spruance, and bassist Trevor Dunn — would be rounded out by thrash legends Dave Lombardo (ex-Slayer, Suicidal Tendencies, Misfits) on drums and Scott Ian (Anthrax) on second guitar.

The brief tour schedule was limited to two dates each in Los Angeles, San Francisco, and Brooklyn. Having completed both L.A. shows and one San Francisco gig, Mr. Bungle rolled into Brooklyn on a damp Monday night (February 10th). With support acts changing for each show, this evening would see opening sets by Spotlights and Full of Hell.

A line around the corner met fans who showed up at Brooklyn Steel well before the first band was set to take the stage. And once fans made it inside, they were greeted with with a huge line for merch that extended through the front lobby and up the stairs, nearly blocking the entrances to the restrooms. Yeah, this show was indeed a big deal.

Taking the Stage: With the venue already pretty full, Spotlights took the stage, delivering a strong atmospheric set that dabbled in post rock, sludge metal, and shoegaze, albeit heavy throughout. The husband-wife pair of guitarist-singer Mario Quintero and bassist-singer Sarah Quintero gelled nicely onstage, backed by the muscular drumming of Chris Enriquez, who rounds out the trio. Spotlights have seen their star rise since signing to Mike Patton’s Ipecac Recordings, and are headlining a number of East Coast club shows of their own around the Mr. Bungle date.

Full of Hell took the stage next, bringing their unique brand of grindcore to a now packed house at Brooklyn Steel. Fans in Brooklyn are used to seeing Full of Hell tear the hell out of small clubs like Saint Vitus, so the mostly sedentary audience at the larger venue served in sharp contrast to the hellfire the band was raising onstage. A small three-person mosh pit eventually broke out, but nothing close to the chaos that Full of Hell shows usually bring. Still, Full of Hell soaked in the moment, with singer Dylan Walker expressing his appreciation in a serene speaking voice that belied the screams he belted out during the band’s songs.

It was then time for Mr. Bungle, with Mike Patton walking out in a red sweater, white shirt, and black tie. The singer serenaded the audience with Mr. Rogers’ “Won’t You Be My Neighbor”, adding some heaviness to the children’s song toward the end. From there, it was a nonstop hardcore and thrash assault. As advertised, the concert was a celebration of Mr. Bungle’s 1986 demo tape, The Raging Wrath of the Easter Bunny. This gig wasn’t about the funk, the experimental rock, and the avant-garde that Bungle explored throughout their career. It was an in-your-face hardcore thrash show, beginning with “Anarchy Up Your Anus” and “Spreading the Thighs of Death”.

Cover songs actually made up the majority of the set, with the first one being a rendition of Corrosion of Conformity’s “Loss for Words” in honor of late drummer Reed Mullin, who passed away late last month. Throughout the night, Mr. Bungle also covered songs from Circle Jerks, 7 Seconds, The Exploited, and others. Scott Ian’s old crossover thrash band Stormtroopers of Death were represented with a politically-reversed take on “Speak English or Die” in which Patton changed the lyrics to “Speak Spanish or Die”. And a hint of Slayer’s “Hell Awaits” served as a nod to Dave Lombardo’s old band. But the highlight, as far as cover songs, came in the form of Cro-Mags’ “Malfunction”, featuring a guest appearance from Cro-Mags founder Harley Flanagan on bass.

The band also played three “new” songs that were written during the era of The Raging Wrath of the Easter Bunny demo but never were released. Of those tracks, “Eracist” was a standout in the set.

For the most part, it was pure hardcore screaming for Patton throughout the night, save for the opening number and a version of “Summer Breeze” by Seals & Croft. The Faith No More singer wasn’t there to showcase his famous six-octave vocal range, much to the chagrin of a good portion of the audience who likely didn’t read the fine print. While the band certainly received a warm reception, it was obvious that there were fans there who wished that Mr. Bungle dipped into their ’90s catalog, as well.

What fans ultimately witnessed was three founding members of Mr. Bungle, now in their fifties, reliving songs they wrote, recorded, and listened to as teenagers — and enjoying every minute of it onstage. Add to the fact that one of those guys has since gone on to be one of rock’s most beloved singers, and that they were joined by two thrash-metal icons, it made for one memorable show.

Note: Photo passes are not being issued for the Mr. Bungle shows, but we’ve put together a gallery of pics courtesy of Melinda Oswandel (as shot from the crowd on an iPhone). Also see the setlist and fan-filmed videos below. Mr. Bungle only have a couple shows remaining, with tickets available here. 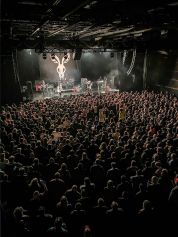 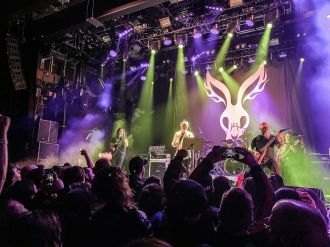 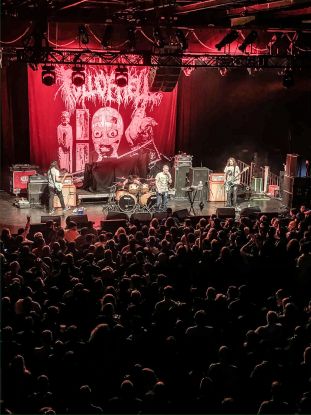 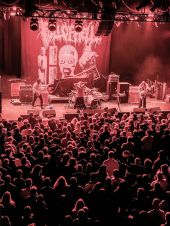 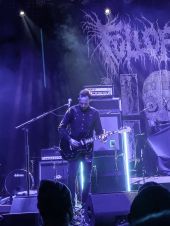