The Pitch: Enola Holmes is a much-needed breath of fresh air at an unsteady time. Based on Nancy Springer’s YA mystery series about the younger sister of famed detective Sherlock Holmes (Henry Cavill), it’s a story about finding your own path and becoming who you want to be. Millie Bobby Brown plays the titular novice detective who must search for her missing mother (Helena Bonham Carter) in 1884 London while avoiding the standard female roles and restrictive finishing school her older brothers would place her in. Along the way, she meets fellow runaway, young Lord Tewkesbury (Louis Partridge), and as the mystery unfolds, they learn they are essentially fighting the same battle. The two teenagers search for their own autonomy as the fires of social reformation blaze around them.

Go Your Own Way: Millie Bobby Brown is captivating as the quirky Enola, a confident, young woman raised outside the patriarchy by her feminist mother. Brown dives headfirst into the role, and her bubbly charisma is a dynamic change from the quiet strength of Stranger Things’ Eleven. Her energy and charm carry the film, and it’s nearly impossible not to root for her. In a nod to Wonder Woman’s origin story, Enola was raised by a mother who didn’t teach her to defer to men or view herself as inherently weak.

Not limited by traditional gender roles, Enola has studied a range of subjects, from chemistry and literature to sports and combat and, of course, deductive reasoning. She fully believes that she is capable of doing anything she sets her mind to. This confidence is continuously challenged once she begins to interact with the outside world, pointing out the ridiculous and limiting expectations for women then and now. When she does doubt herself or make a mistake, it’s because she is human, not because she’s a girl. And most important, she’s not afraid to admit her mistakes or weaknesses because her life does not revolve around reaching for society’s idea of perfection. 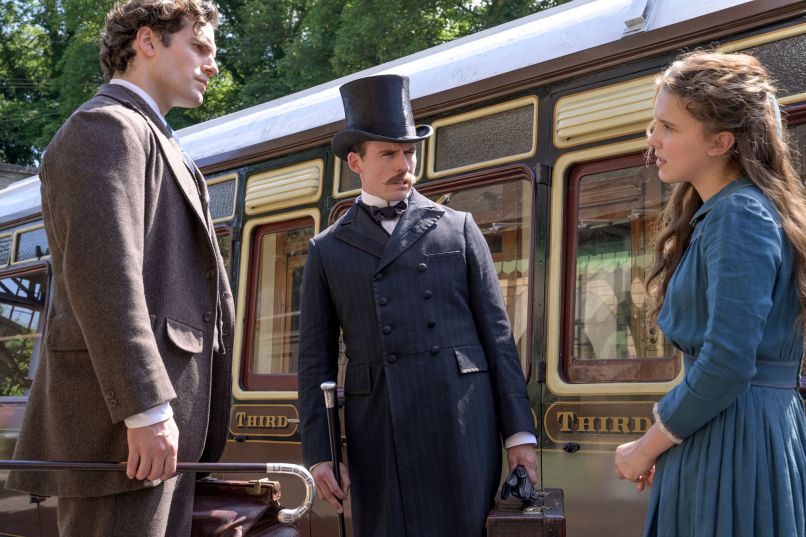 If the Corset Fits: Enola’s relationship with clothing is one of the more revolutionary aspects of the story. In an early scene, she tries on a mustache while describing her mother’s insistence that Enola is free to be anyone, setting a tone of support necessary for true expression. We’re introduced to Enola in a dress, but she resists wearing the stuffy collars and undergarment framework imposed on her by the finishing school. When shedding her chest-binding for a corset, she notes that it’s a “symbol of repression for those forced to wear it,” but she chooses to do so because it aids in her investigation.

Instead, Enola spends an equal amount of time in boy’s clothes, often paying them to swap their garments with her. It’s an interesting reflection of a generation developing new ways to understand gender. Though she identifies herself as a girl, her willingness to shift fluidly back and forth shows how the freedom to explore your own identity can inspire confidence. Enola is not making a judgement on either gender, simply shifting to fit her needs in the moment and to feel comfortable in her own skin.

A Long and Winding Road: Enola Holmes is stylish, using quick cuts, title cards, and scrapbook energy in a nod to the graphic novel adaptations of its source material. These stylistic choices are endearing at times and yet also grating at others. Enola talks to the audience throughout the film, breaking the fourth wall to describe her thought processes and to give us background context. It’s mostly charming, thanks to Brown’s spot-on comedic timing, but its extensive use grows tiresome, and there are several instances where the gimmick falls flat. These problems could likely be solved with a shorter run time. Removing about 15 minutes of the story would keep these cheeky devices feeling fresh and novel rather than exhausting.

The Usual Suspects: Helena Bonham Carter is magnificent as always. In quick flashbacks, she gives Enola inspirational advice impacting her daily decision-making, at times even saving her life. Henry Cavill as Sherlock Holmes is understated and magnetic, a welcome reminder of his days on The Tudors, though his gigantic muscles stand out in the tweed suits of an austere British detective. He’s not given much to do, but it’s not really his story. This feminist reading of Sir Arthur Conan Doyle’s source material requires Sherlock to question his beliefs and lack of interest in changing a world designed to suit him. Caville takes these challenges with grace and contemplation, in contrast to his brother, Mycroft (Sam Claflin), who angrily dismisses any suggestion that he might be wrong.

Tewksbury’s relationship with Enola is a fresh take on the adventure love stories most of us have grown up watching. She’s openly horrified at the thought of romance, choosing her own goals over his at times and at others choosing to help him. Not because she loves him but because she is capable when he is not. It’s a sweet subversion, but the relationship takes a while to find its footing, and the chemistry between the two actors never feels as confident as Enola’s chemistry with the audience.

What’s Streaming on Netflix in September 2020

The Verdict: At its heart, Enola Holmes explores leadership and generational change. A moving ending reminds us that we often get so caught up in changing the world for our children that we forget to teach them to change the world for themselves.

Enola’s true power lies in the fact that she was never told to fear being powerful, challenging countless narratives presenting female strength as a source of shame. But the film takes an important step further, challenging not only the rigid patriarchy that made the rules, but guidance from older generations in how to break them.

On her journey, Enola confronts the advice her mother would have given and goes a different way. She is fully her own person, not victim to the shame and expectations forced upon so many young women. She is allowed to be herself, and because of it, she flourishes. It’s an optimistic take on passing the feminist torch designed to challenge a younger generation to choose their own path and to show the rest of us how to let them.

Where to See it? You can sleuth alongside Enola on Netflix starting Wednesday, September 23rd.

Millie Bobby Brown's Enola Holmes Challenges the Patriarchy with a Wink and a Smile: Review