The Pitch: It’s 2049, and the Earth is plagued by a mysterious apocalyptic event – details are scarce, but it seems as though the world is in its last gasps, and time is running out. Perhaps the only man left on Earth is Augustine Lofthouse (George Clooney), an astronomer dying of cancer who chooses to stay behind while the rest of the personnel evacuate their observatory in the Arctic Circle.

As he whiles away the days and weeks waiting for the world to end, two events force him into action: the arrival of a mute girl (seven-year-old newbie Caoilinn Springall) seemingly left behind in the evacuation, and the realization that a spaceship called the Aether is on its way back to the planet. They’ve spent the last few years scoping out a new planet for humanity called K-23, and are coming back to report their findings — not realizing the planet they want to save is dead already. Augustine, spurred by new purpose, chooses to risk his life to reach a communications tower that will allow him to warn off the Aether before they return to a doomed Earth.

Rebel Without a Clooney: George Clooney the Director has always been far more of a wild card than George Clooney the Actor. In front of the camera, he can work wonders with his signature mix of boyish charm and world-weariness, even in the most unremarkable of projects. But in the director’s chair, he could either give you masterpieces like Good Night and Good Luck or ineffectual dreck like Suburbicon and The Monuments Men. With his first film in nearly four years, The Midnight Sky proves him to be a much stronger presence as a performer than as a creative force.

The script, based on the novel by Lily Brooks-Dalton and adapted by Mark L. Smith, warps the book’s meditation on loneliness and isolation (potent subjects for a year where we’re all stuck without tangible human contact) into a warmed-over bowl of every big genre movie of the last decade. There are hints of Gravity, The Martian, Interstellar, Ad Astra, The Road, and even Logan mixed throughout the story, but it all adds up to a rather bland dish that’s tasted better elsewhere.

Ostensibly, The Midnight Sky aims to explore deeply humanistic themes of resilience, regret, and the existential mysteries of the end of our species — the mark of a lot of good, cerebral sci-fi. Flitting between Augustine’s trials and tribulations in the Arctic cold and the goings-on on the Aether could conceivably make for a fascinating interplay between the fragility of human life and our deep need for connection. But for the most part, both stories feel disconnected, like we’re shifting between two different movies, and neither half gets enough momentum to truly shine. 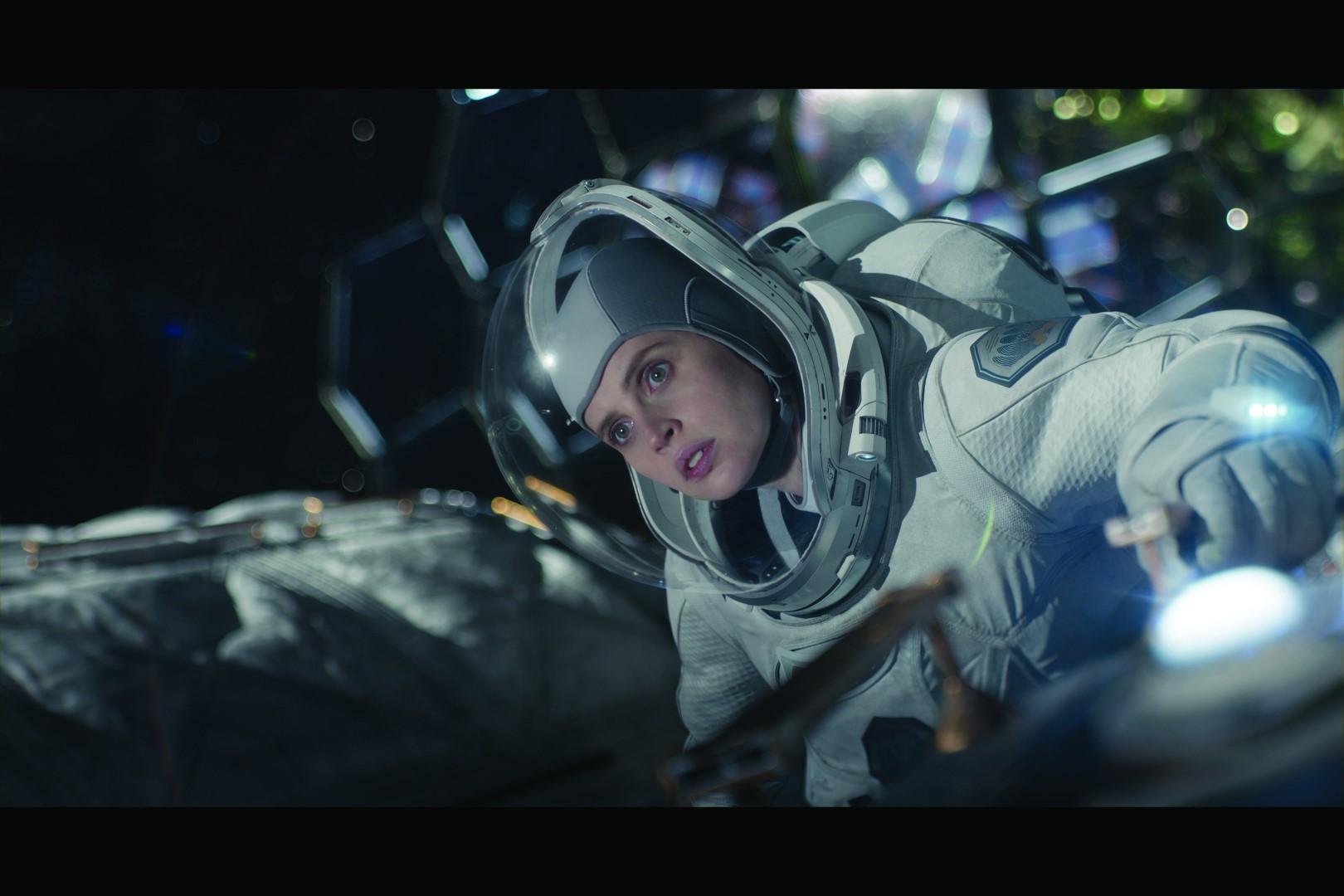 Is There Intelligent Life Down There? It doesn’t help that, for all its handsome production values, Clooney and producer Grant Heslov commit to some of the most baffling creative choices I’ve seen in a good long while. At their best, Martin Ruhe shoots the elegant, organically-designed Aether with a curious, fascinating flair, even as the crew itself (led by Felicity Jones, David Oyelowo, Demian Bichir, Tiffany Boone, and Kyle Chandler) float through them with hardly any personality or verve.

At their worst, we get a bizarre flashback conceit in which Clooney casts Ethan Peck to play a young version of himself, but overdubs him with Clooney’s own pitch-shifted line deliveries. Your jaw will drop when you see this; it’s such a bad idea, and honestly does both actors a disservice. Doing the Marvel de-aging thing would have been less uncanny.

Add to that baffling tonal shifts like an impromptu rendition of “Sweet Caroline” in outer space and a third act reveal as mawkish as it is unearned, and it’s clear The Midnight Sky doesn’t even know what it wants to say.

Defying Gravity: Then again, these choices don’t make much of a difference when the story plods along with a sense of predictable inevitability. There’s the failed trek through the bitter Arctic snow, cracking ice underfoot, a nail-biting EVA repair mission that goes about how you predict (remember the last time George Clooney went to space?). We’ve seen all of this before, and Clooney’s mopey astronomer and Springall’s cipher of a kid can’t inject any life into these life-threatening situations.

The Verdict: Fittingly, The Midnight Sky suffers from the same weightlessness as its astronauts — Clooney opens his big, wet soulful eyes, and Alexandre Desplat‘s overly-aggressive score lays on the emotion as thick as syrup, but none of it lands. It’s the same old story of an old man trying to redeem himself for his past mistakes, set against the backdrop of the end of the world. What’s worse, Clooney can do little but ape the movies that inspired him, with nothing new to bring to the table. Hate to say it, but the Earth of The Midnight Sky goes out like a whimper, and I can’t really blame it.

Where’s It Playing? The Midnight Sky tugs at your heartstrings from space a little too hard on Netflix on December 23rd.

George Clooney's The Midnight Sky Blandly Goes Where Plenty of Sci-Fi Has Gone Before: Review