The Day Room is a column by Philip Cosores that features stories from the music industry that shine a light and brighten the corners.

My initial reason for asking Elizabeth Morris to talk was for an EP she self-released last year. She was going to guest on our podcast (plug) but was only days away from moving from London to Italy, and I ended up losing track of the idea until recently, when I saw her tweet about listening to the mastered versions of the new album from her band, Allo Darlin’.

Now, while I thought it might be nice to get some exclusive news bits about her new music (nine songs completed, eyeing a fall release on Fortuna POP! internationally and likely with Slumberland again here in the U.S.), I mostly just wanted to interview her before others. As a writer, you want to be working in unmined territory, but publishers, and maybe readers, want to read about what is of the moment, even if that means 30 interviews with St. Vincent all appearing within a month’s span of time. Likewise, writers need to work, so they are likely to seek out St. Vincent assignments around her album release, because it has a good chance of being picked up. So, between an artist and their team’s concerns about selling records and tickets, a publication’s concern with getting readers, those readers’ concerns with material that speaks to their current interests, and a writer’s concern for work, articles that are thinking outside the box, especially when it requires money or time, is generally a hard sell. This, in case you haven’t noticed, is sort of what Aux.Out. does: give writers a space to pursue some of these stories

Fortunately, Morris is not really caught up in the industry machine at the moment and is receptive to my contacting her directly. I learn why when I Skype with her, our video connection working long enough for me to get a “genuine Italian view” from the Florence residence she shares with her fiance. An Australian native, Morris might be taking to her move away from London better than most would because she is a non-native, but it doesn’t take long to see that she is a woman thinking outside the box of what being a musician has to mean for her. 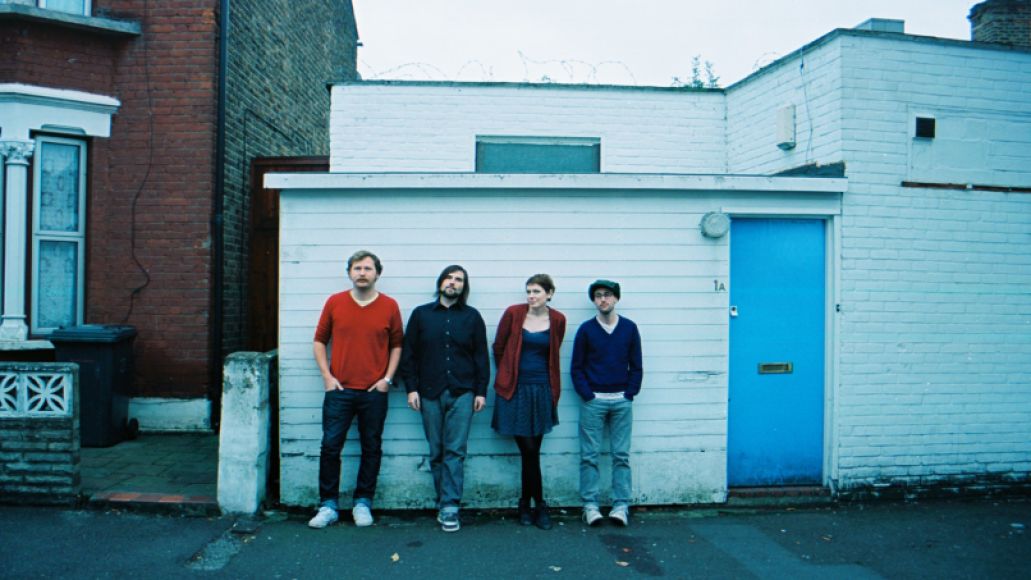 Allo Darlin’ have released two albums whose success is very relative to where you are standing. Their 2010 self-titled debut received four stars in the old CoS rating system and a 7.9 from Pitchfork, not a result to scoff at. Their more hi-fi follow-up, 2012’s Europe, was an 8.1 P4k, 8/10 in Spin, and placed in the top 50 year-end polls for both Rolling Stone and CoS.

“But ultimately, we still haven’t really made any money,” Morris admits, and she doesn’t have to point out that besides all these critical nods, there never has been much in terms of buzz or hype surrounding Allo Darlin’, at least in the U.S. The thing is, though, that the music of Morris is heavily indebted to her band’s lack of monetary compensation. On their first LP, “Silver Dollars” directly addresses financial realities with the kind of clever insights that Morris is known for, with her second verse saying, “I sold all my records, but I’m still in debt by two grand/ And yeah, we played that show, but we spent what we made on the cab/ I’m even starting to wish that I’d finished a legal vocation/ My life would be dull, but at least I could go on vacation.” Likewise, Europe has the shadow of Europe’s economic crisis lingering over the collection.

“I wasn’t really aware it was that obvious,” Morris laughs, “but that’s certainly how I was feeling. [Europe] did so much better than we thought it would, and we got a bunch of attention from people like Rough Trade. In turn, that has affected this album.”

Despite what might be viewed as success from the outside, putting everything you have into a creative career can be draining, and more people than we like to admit aren’t able to do it. When your passion is also your chief source of income, the downsides of your life choices might be more significant than the joy of loving your work.

“It makes for a more stressful situation,” Morris says. “I noticed that in terms of the band, and it makes every decision feel more important. You don’t want to be about the money, but money becomes really important when you don’t have any. I think in that way it was affecting, and I think in the first two albums you can tell they are not really the songs of someone who has a lot of money. Everyone is in the same boat, though. It makes for a collegial atmosphere. 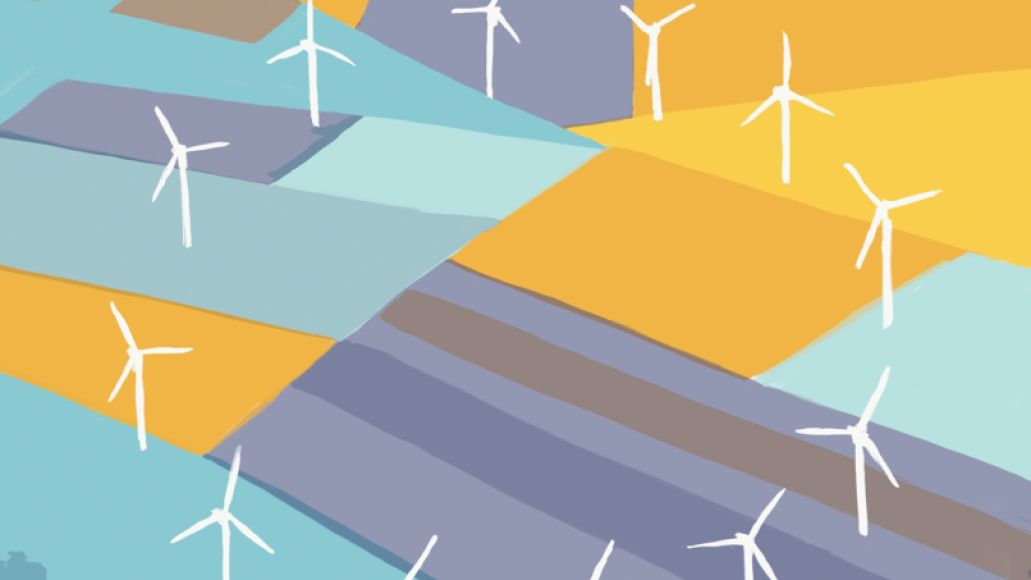 “I think for a lot of people, especially those born in London or people from England, it is almost impossible to imagine living anywhere else. I’m sure the same with most big cities. New York is probably the same. You can’t imagine living anywhere else because the city just draws you in. Our friends would ask, ‘Why would you want to ever leave London? It has everything.’ For me, moving away and seeing how life can be different and learning a new language and having the sun… it’s made a massive difference.”

“Rather than struggle,” she continues, “I just moved somewhere else, and that immediately took the stress off. You realize the world is a lot bigger than London and the London indie pop scene. I think I was very caught up in all that. This album is a lot more relaxed, and I’m not feeling any pressure to tour a lot or to take every opportunity. You never take anything like, ‘That’s great that that happened,’ or if we are offered a show, in the back of your mind, you’re always thinking what that could lead to. You’re always working to the goal of one day being able to live off of just being a band. It’s so difficult to achieve that without touring relentlessly or selling songs for commercials. It is impossible, really. So, rather than try to achieve that by touring too much, trying to sell a record, we can just say, ‘If people like it, that’s great.’ I’m very content with where we are, just being a special thing.”

“I’m teaching English in Florence,” Morris says. “In London, you put everything on hold for your band because you have to give the band every possible chance of succeeding and that means not having a regular job. I told myself that I needed to be able to go off and go on tour. It felt like taking another job would be admitting defeat to myself, or giving up on the band. But, it’s not like that at all. It doesn’t have to be at least. It doesn’t have to be that super-stressed, highly charged thing, with the feeling that you always have to build on everything, working for this end goal, which I guess is fame and riches?

“Which is funny because you don’t really want that. You want to just have a life or be able to pay the rent. For me, it’s been about redefining what success really means: doing the best work you can. Actually living a life that is beautiful and makes you happy. Maybe that’s growing up.” 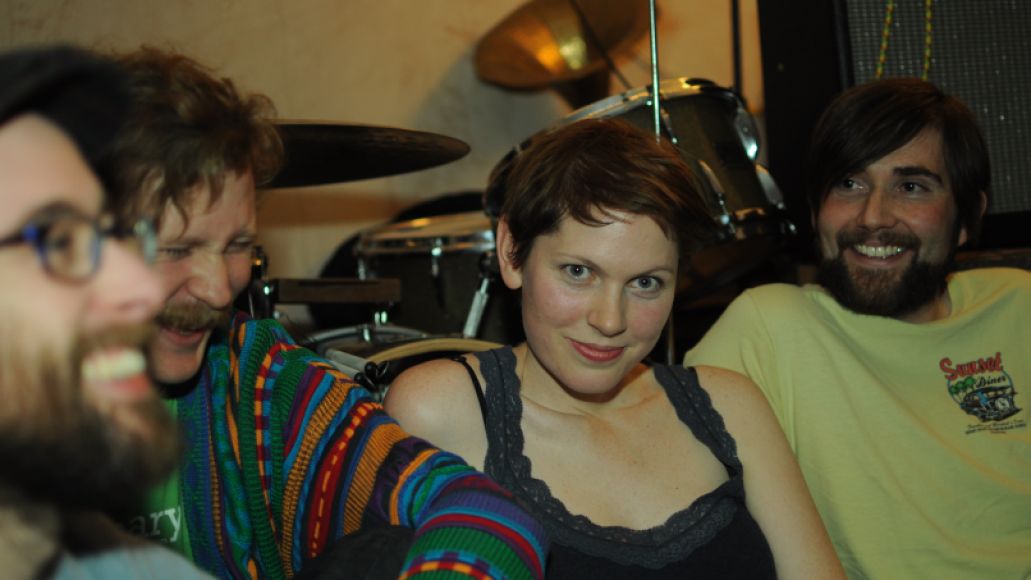 Over the course of our conversation, Morris repeatedly mentions television commercials as a way to make money, clearly the source of some conversation or internal conflict.

“I know what bands have to do to live the dream, and I really don’t want to do what they have to do,” she explains. “Selling our songs to commercials has come up before, and it is something that is really difficult. I really hope it doesn’t happen. A friend’s band were offered something similar, and it is so much money. If your band has no money, it’s so difficult. To see footballers like Messi, they do so much advertising. They must get €1 million a week, but maybe the shoes really do make them better. I can’t really say. For us, it’s really hard. You wish it didn’t happen, like any tough decision. For me, that’s not why you write songs, and I think it can backfire.”

That reason for writing songs can get lost when you are writing to survive, playing shows to pay your bills, needing the band to succeed in order to have a band to begin with. It’s easy to see how someone would begin compromising aspects of their creative vision, begin making music that wasn’t honest, and maybe they succeed and fool everyone, but at what cost?

Morris and I spend the concluding moments of our conversation talking about music. About hers and others. I tell her that I have been really into emotionally intense music as of late, stuff that makes me emotional in turn. She agrees, noting the refreshment that comes with someone “unafraid to let their emotions go.” She cites Townes Van Zandt and John Darnielle, and I know we are on the same page. I list off a few of her songs that do that particularly well: “Let’s Go Swimming”, “My Heart Is a Drummer”, and “My Sweet Friend”.

“It’s something you stumble upon by accident,” she says modestly. “Because if I knew how to do this all the time, all the songs would be like that. The new songs might have that ‘something.’ I like that it’s hard to tell right now. Some of them are noisier, but it’s definitely the most emotional record yet. At least for me.”

And when she says “for me,” it literally can be just for her now, not that she is just a teacher that plays in a band. The last song on her last album features a repeating line, “A record is not just a record, a record can hold memories, all these records sound the same to me, and I’m full up with memories.” The song, “My Sweet Friend”, is essentially about longing, the desire for connection, something I keep coming back to when I think about music and why we listen to it in groups and why we talk about it and care about it. And Morris hasn’t lost sight of that, even if she doesn’t need that connection to happen for her literal survival. As she says in her song “Silver Dollars”, “We do it because we love it.” If you are looking for truth or something bigger than yourself in a song, where else would you look to find it but from a song that exists solely to communicate truth to you?

“You have to remember that song can be bigger than how you intend,” she tells me. “Maybe somebody in the audience… that’s a favorite song, and even if you’ve moved on past that situation, you’ve got to sing it for them without feeling like a fake, even if those words are no longer true for you. But, it’s possible. Fleetwood Mac managed to do it well.”

Allo Darlin': A Record Is Not Just A Record