Component is a section of Aux.Out. for one-off pieces, special editorials, and lost orphans of the music discussion. Today, Jody Beth Rosen calls attention to the overlooked band Scritti Politti and their 1985 work, Cupid & Psyche 85.

The tony British publisher Faber has just named Scritti Politti singer-songwriter Green Gartside its artist in residence in an effort to step up its music literature game. If the name Scritti Politti sounds familiar, think back to 1985, when the group’s single “Perfect Way” was a No. 11 hit on the U.S. Hot 100 — and a No. 6 hit on Billboard’s dance chart. The album from which “Perfect Way” emerged, Cupid & Psyche 85, combines feather-light, MTV-friendly vocals with R&B, funk, reggae, and state-of-the-art synthesizer programming. Scritti Politti, given their background, were an unlikely crossover success, even if that success was fleeting.

Scritti Politti started out as a post-punk band in the UK in the late 1970s, inspired by theorists such as Antonio Gramsci; one of Scritti’s early songs, “Hegemony”, was named after the Marxist concept of one state or social class’s dominance over another. This working-class consciousness applied to a transparency in the band’s business practices as well. On the website Instant Team Work, original drummer Tom Morley says, “We were pioneers of DIY recording and inspired many other indie bands to make their own records by printing all the costs and names of cheap studios and pressing plants on our record sleeves.”

By 1985, Scritti Politti was just Gartside and a producer, arranger, and phalanx of studio musicians that included Fred Maher (Lou Reed, Matthew Sweet) and EBN-OZN’s Ned “EBN” Liben. Cupid & Psyche 85 owed much of its soul and soft-rock sound to producer Arif Mardin, who had worked with The Bee Gees and Roberta Flack & Donny Hathaway in the 1970s and continued to be a sought-after name in the ‘80s.

If Cupid & Psyche 85 sounded like a lot of other music on the radio, it was because of a relatively new piece of synthesizer technology called the Fairlight CMI. Designed in 1979, it became a fixture of every major recording studio because of its possibilities for sampling and sequencing and its ability to produce multiple timbres at once. On this album, the programming duties belonged to David Gamson, who, according to an interview on the GForce Software site, used the Fairlight and the TR-808, Linndrum, Oberheim system, and DX-7, among other gear. One of the Fairlight’s most recognizable sounds — on Cupid & Psyche 85 and elsewhere — is the ORCH5 sample, better known as the “orchestra hit.” Believed by many to be sampled from Stravinsky’s The Firebird, this assertive “stab” would show up in The Art of Noise’s “Close (to the Edit)” and Afrika Bambaataa’s “Planet Rock”. The most prominent use of the ORCH5 on Cupid & Psyche 85 is probably on the showstopper “Hypnotize”, adding a layer of aggression to Scritti’s lightly frisky funk. 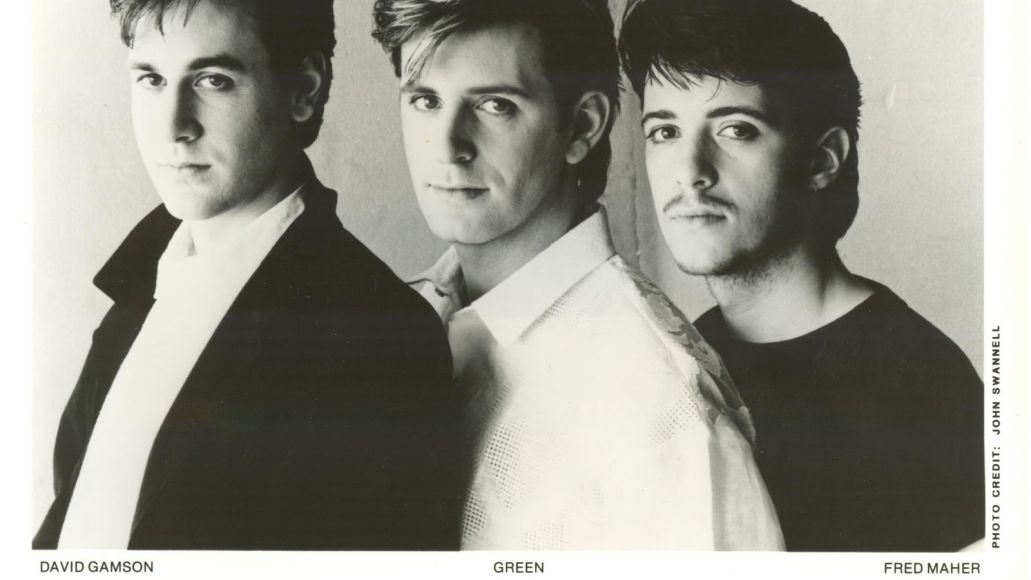 Not content to just be a collection of au courant sounds and lush vocals, Cupid & Psyche 85 uses Gartside’s interest in Marxism and deconstructionist theory to subvert the blissful, accessible pop with ideas about language, work, and capitalism. “There’s gonna be a day when the rich get theirs,” Gartside sings on “Lover to Fall”. “Don’t Work That Hard” is a love song, sort of, but even the title suggests an entreaty to not get crushed under the weight of labor demands. He sings, “I need love for the power” (flipping the script on “Hegemony” as sexual role-play?) and “I got a piece for the wicked/ Use it oh so fast” (“piece” being sexual in its own right). The phrase that “A Little Knowledge” name checks, per Phrases.org.uk, goes back further than the Alexander Pope quote it’s associated with (“…is a dangerous thing”), actually belonging to an anonymous author in 1698: “Twas well observed by my Lord Bacon, That a little knowledge is apt to puff up, and make men giddy, but a greater share of it will set them right, and bring them to low and humble thoughts of themselves.”

The lyrics of “Small Talk” reference a World War II propaganda campaign; “Careless Talk Costs Lives” becomes “Careless talk costs more than you bargained for” in a song that actually seems to glorify the act of small talk as a remedy for “prophesying,” perhaps owing to what Gartside told NME: that he was beginning to consider a “bankruptcy in Marxism to deal with ideology or any artistic community.” That quote in particular was Gartside’s take on “Wood Beez (Pray Like Aretha Franklin)”, Scritti’s song about “the whole question of what pop is; its relationship to language, power and politics.” In “Wood Beez”, Gartside is happy to proclaim himself “a would-be” and sounds proud when he sings, “Nothing/ Oh, nothing” in the pre-chorus. Scritti’s answer to what pop is does revolve around the word “nothing”; there’s nothing that Gartside wouldn’t do to be with his girl, “nothing” as a welcomed form of inertia, “nothing” as a deconstructionist scorched-earth policy denying the assignation of meaning to, well, anything.

Gartside’s wispy voice mirrors Michael Jackson, who was still on top of the world in 1985, even without a full-length follow-up to 1982’s Thriller. Cupid & Psyche 85’s biggest influence comes from the urban-oriented music of the 1980s. Gartside told Simon Reynolds in an interview for the Totally Wired book that David Gamson, the record’s synthesizer player, programmer, and arranger, had grown up with black radio stations in New York and was a fan of Parliament-Funkadelic. Gartside says Cupid & Psyche 85 was largely about expressing that fandom, especially hip-hop, which would emerge as a greater force in Scritti’s subsequent releases.

Whether consciously or subconsciously, Cupid & Psyche 85 also echoed a growing trend in UK indie known as “twee”: in 1986, NME would release a cassette called C-86 as a document of things happening in music at the time, and what people would grow to love about that tape was the artists’ appreciation of what AllMusic would call “the jangly guitar pop of The Smiths, the three-chord naiveté of The Ramones, and the nostalgic sweetness of the girl group era.” In indie circles, twee was thought of as “shambling” or “anorak,” but it had a presence in slick mainstream music, especially with Strawberry Switchblade’s 1985 synthpop hit “Since Yesterday”, which must have been on Gartside’s radar that year. “New Pop,” post-punk’s challenge to itself to renounce its austerity, had been in the air a few years as well, and Jess Harvell at Pitchfork believes writer Paul Morley was responsible. In the NME‘s 1980 year-end issue, [Morley] recoiled from the cassette-trader feebleness post-punk had arrived at with a call to “bring life back to the radio, to make the single count” and a push towards “overground brightness.”

Scritti Politti, insofar as they’re remembered at all, are remembered primarily in the UK press for their early exploits in DIY and irreverent post-punk songs such as “Jacques Derrida”. In America, they’re more of a trivia question, although “Perfect Way” does show up in some of the better karaoke systems. It’s a shame that Cupid & Psyche 85 isn’t widely regarded as a classic of its time, especially with a renewed interest in the Fairlight — or at least a grudging acceptance from the rock community that Fairlights, Linndrums, and 808s were an undeniable force in some of the most acclaimed records of the 1980s. While very few people are going out of their way to emulate Cupid & Psyche 85 — Max Tundra being one of them — it feels very much a piece of the Beyoncé-and-Bruno pop landscape of 2014. If Gartside’s new job as the face of Faber causes people to revisit Scritti’s triumphant crossover out of curiosity, they will find that it feels fresher than ever.

Cupid and Psyche 85: The Unspoken Influence of Scritti Politti