I recently watched every episode of Breaking Bad in under two weeks. Last September, I consumed all five seasons of The Wire in about three-and-a-half weeks. Eastbound & Down clocked in at a little over four or five days (I was busy). In 2010, I re-watched The X-Files – all 202 episodes – from September to December. A year before that, however, I consumed all four seasons of Lost in about five weeks flat. I’m not proud of myself.

Television is about escape and the loss of reality. You plug in, you lose yourself, and your troubles take a backseat. There’s nothing to think about, save for what’s on-screen. You connect with a character, maybe two, entwine yourself in their predicaments, solve their problems, rationalize their emotions, and feel their tension. You might gasp, you might sweat, you might scoff, you might laugh. It’s everything you can do with your own life, but there’s an on-off button, and you find yourself flicking it up and down ad-infinitum.

In retrospect, I guess I should feel ashamed at how much television I consume. I’d like to think it’s all “good stuff,” that I’m attending a larger, more introspective sect of my culture, but what it boils down to is me staring long and hard at a light bulb for hours on end. Once the proverbial curtain drops, I’m only left with an archive of stories – ensuing, concluded, or discontinued – and for what?

That’s what I’ve been thinking about lately, and I think I have an answer. It has to do with Jackson Browne, slightly to do with  Truman Burbank and, to a greater extent, Cameron Crowe. The former and the latter have plenty in common (see: 1982’s Fast Times at Ridgemont High),while Mr. Burbank will take some finagling to bridge in. Shall we?

[Post-It #1: If you’ve stumbled upon this column, here’s the quick gist: I listen to a shower radio every time I feel the need to clean my body, and it’s in those intimate, highly relaxing moments that my pop culture-shattered mind can put some sensible pieces together. What happens is that I’ll hear a track, and my mind goes for a little trip. It’s fun.]

I’ve always loved “Somebody’s Baby”. Always. It’s one of my favorite classic hits from the ’80s, and I’m still convinced it’s Jackson Browne’s greatest track to date. It’s pure pop, it’s hardly rock ‘n’ roll, it’s emotionally sappy, but so what. To me, it’s always defined that feeling of youthful ignorance, the foolish ideas we sometimes buy, like how “everything’s gonna be okay” or “love conquers all.” I’m normally a very cynical individual, but in the song’s four minutes and 16 seconds, I’m a human Hallmark card.

Speaking of holidays, a couple of days prior to Hannukah, I had just finished wrapping up gifts, one of which I was particularly fond of, a silver and ruby-encrusted, heart-shaped necklace for my girlfriend. Now, I’m not one to buy into the whole holiday spirit mumbo-jumbo business; never have, never will. However, I was feeling particularly “jovial,” and I found myself getting ramped up for the festivities to come. With all the holiday preparations complete, I hopped in the shower and turned on my shower radio only to hear – yep –  Jackson Browne’s “Somebody’s Baby”.

How cinematic, I thought. The past 20 minutes felt like nothing more than a montage, and a hokey one at that too. I folded laundry, I wrapped gifts, I stowed them away, and I signed all of the Christmas cards to send out; in fact, the only thing missing was Jimmy Stewart. That song, however, was too fucking perfect. Granted, the whole thing can be construed as a stalker anthem, much like The Police’s “Every Breath You Take”, but its mood and poppy decadence closely aligned itself with my gooey, holiday-tinged feelings.

It greased my mind some. I asked myself, Well, if I had to choose, what song would I have used to soundtrack that moment? I didn’t really answer that; instead, I thought of that question as a whole. It made me think back to the dozens of times I’d turned to music to “soundtrack” a particular event. Like when I put The Replacements’ “Sixteen Blue” on repeat after being too chickenshit to break up with a past fling in person. Or, when I witnessed a close friend of mine going home with the girl I gave my heart to, oh I just had to take a cab home then, so I could be in privacy as I listened to Morrissey sing me his lullabies. Ha, how about all those train rides to and from work, listening to David Byrne speak of “Houses in Motion“? These aren’t coincidences, they’re choices or preferences I’ve consciously made in these moments. It’s as if some innate part of me needs that soundtrack, as if life is some sort of movie 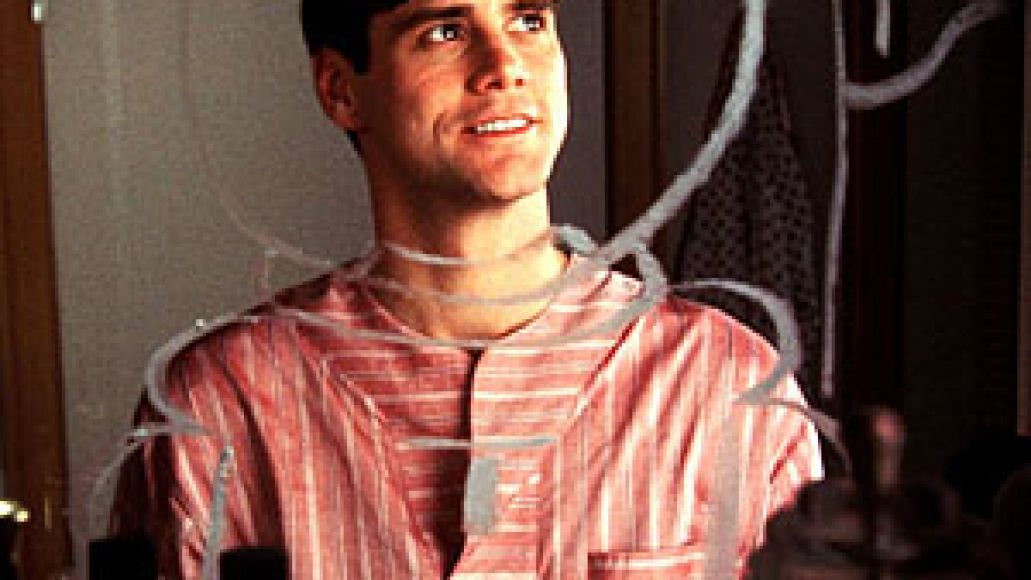 That is a picture of Truman Burbank. If you’ve seen Peter Weir’s 1998 film, The Truman Show, you know it’s basically about Truman (Jim Carrey) whose real life is a television show that millions of people across the world watch, and there’s a lot of ambient, foreboding music by Philip Glass, and Laura Linney is ultimately creepy in it, and Paul Giamatti outperforms Ed Harris. Well, believe it or not, there’s an actual syndrome based on that movie now, and it’s aptly called The Truman Show delusion. According to Wikipedia, it’s “a type of persecutory/grandiose delusion in which patients believe their lives are staged plays or reality television shows.”

So it’s not officially recognized per se, but there are some discussions amongst psychiatrists who mostly agree it’s an extension of persecutory and grandiose delusions. It’s not too far-fetched, especially in a world consumed by handheld camcorders, endless social networking feeds, and the continuous influx of reality television programming. Look, I know there aren’t any secret cameras and that I’m not part of a bigger picture scheme (a la South Park’s Earth). I actually don’t think I’m too delusional at all. I just personally feel life is more interesting when it’s taken into that sort of perspective. To quote Daimon, “When the music of a state changes, the constitution will change, too.” It’s the classic life imitating art imitating life thingy majig.

This way of thinking probably explains why I spend minutes cycling through my iPod searching for that key song to score that perfect moment. Sometimes it’s aggravating, especially if the moment’s passed. Then I’m just walking around somewhat confused, trying to decide how I’m currently feeling, and how music might be able to amplify those feelings. Sometimes, and here’s where you’ll reach for the phone, I actually replay tracks previously used in movies, almost as if I need to revisit feelings and emotions that didn’t happen to me. For example: Every time I leave Miami at night, I’m quick to blast Phil Collins’ “In the Air Tonight” and just stare quietly at the road ahead, brooding like a moron. I’m not proud of myself for that, either.

You know who’s a big fan of this style of thinking, or at least I think he is? Cameron Crowe. You can’t watch one film of his without remembering at least one song from the soundtrack. Quick replay, totally off the top of my head:

Admittedly, I’m a big fan of his work, but I don’t think these memories are solely those of a die-hard Crowe fan, with the exception of Singles or Vanilla Sky. I’d like to believe these songs are wired to the films because they truly elevate each scene emotionally and the music itself tends to sensationalize average human feelings. This isn’t anything new; in fact, this concept of melodrama dates back to the 18th and 19th centuries, when plays were accompanied by music to orchestrate the tension or feelings put in action. Hell, it’s likely Lincoln’s assassination took place amidst such a marriage – he was, after all, watching the melodrama Our American Cousin. Chew on that for a second.

[Post-It #2: I’ve had an unnerving fear of Lincoln since my youth. I used to think he haunted my room and from time to time I would have lucid dreams of him staring at me from the edge of my bed. No, I’ve never visited the Lincoln Memorial because of this, and yet oddly enough, he’s one of my favorite presidents in American history. I mentioned I’m not insane, right?]

In what’s arguably Crowe’s most iconic scene to date – Lloyd Dobbler standing outside Diane Court’s house with a boombox blasting “In Your Eyes” towards the climax of Say Anything – John Cusack can only do so much with his deadpan mug. Rather, it’s that goddamn Peter Gabriel song and that goddamn synth line that stresses those shattered feelings and how he truly feels inside. So, why can’t life be like that sometimes?

Several years later, Crowe directed his major breakthrough film Jerry Maguire, and there’s a scene (amongst many) that has stuck with me for over a decade. We follow the down-in-the-ditches sports agent (Tom Cruise) to one of his client’s houses, where he shakes on a big deal that could save his career, and there’s this great moment where he’s in the car driving back singing along to the radio. The problem is that he can’t find the right song to truly express that feeling. It’s sort of meta, come to think of it, the way Crowe pokes fun at his own formula. Finally, he comes across Tom Petty’s “Free Falling”, and he joyfully screams along to the chorus, letting it all out as he races down the sunny country road. It’s a moment to relish, but it’s a scene that, I feel, explains my obsessive connections to pop culture. To me, life won’t ever be as interesting as the programs I escape into, but it’s those little moments paired with music that make me think, Hey, what if…

…and I’ll never answer that question in full.