Welcome to Life Review, a new live review section on Aux.Out that looks to expand beyond the access provided by a concert ticket. Today, Caitlin White discusses her connection to the music of Noah Gundersen and her relationship with her sister.

“Cait, wanna come to this show with me tomorrow night?” my sister Natalie tentatively suggested. I was visiting her in Seattle, where she’d moved for college and also the first city that she had explored and learned without me.

“What show is it?” I shot back. I was still disdainful of my little sister’s tastes in music; she was supposed to get that info from me, fountain of knowledge, not introduce me to new things. Still, I acquiesced and admitted that her taste might possibly rival mine. As I watched Noah Gundersen play Seattle’s own Chop Suey back in 2010, I knew I was watching more than just a local boy make good. This was a world-class songwriter.

So, Natalie’s love for Noah Gundersen was the reason I came to that first show at Chop Suey and the reason I acquired all his prior EPs—I especially recommend Saints & Liars—and why I bought the albums with his band The Courage. She’s the reason why listening to that Saints & Liars EP immediately catapults me back to rainy car drives through quaint Seattle neighborhoods, dreading when I’d have to leave her and head back to LA.

When I graduated high school and left Oregon for college, we had never been apart for more than a week. She was my best friend, my other half; in some ways, our relationship was how I found my definition of myself. She stayed in Portland to finish high school, then headed to Seattle to her own university, but music was the thing we used to keep our relationship intact. Even when we couldn’t talk all the time, we would mail specifically sister-curated mixes back and forth up the west coast. Noah Gundersen began to pop up on them more and more after that initial concert. 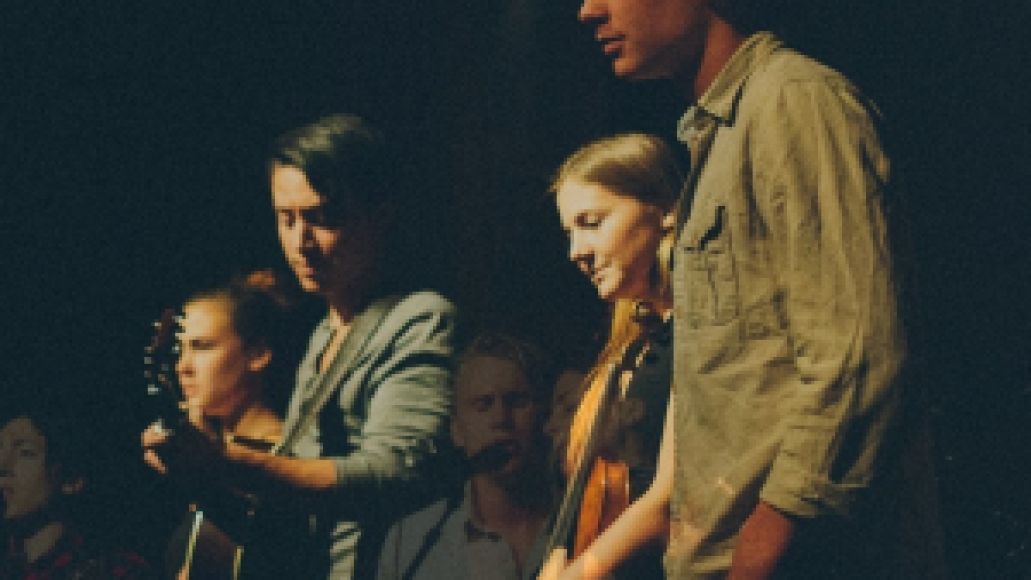 Over the last few years as I’ve transitioned from obsessive music fan to someone who actually works in the industry, Noah Gundersen felt like one of the artists who never crossed into “work.” His old EPs and those records with The Courage remained a collection of songs that I could return to and become just a fan again, just a girl getting used to growing up and leaving her family and hometown behind. Listening to Noah’s songs even remind me of where I was born. They sound like the Pacific Northwest—gloomy and green, grey. Even though I’ve always felt that these songs were personal, hidden treasures, I wasn’t upset when I saw Noah had signed to Dualtone and was releasing his first proper full-length, Ledges. “Finally,” I thought.

I was invited to attend one of his shows in Manhattan’s tiny Rockwood Music Hall, and I went without listening to the new record. I’d first discovered him as a live artist, and I wanted to be exposed to his new material in the same way. I texted my sister, though, to let her know I was going to the show and planned to cover it. “Are you going to give me credit for introducing you to him?” she shot back. There was no other way for me to do my relationship with his music justice; it all came back to her.

The crowd at Rockwood was, understandably, a bit diehard about the show. Considering that Gundersen has been putting out music for over five years, he’s developed a solid fan base, even if the mainstream press and labels have only just caught wind. I stood off in a corner and tried not to distract the enthusiasts while taking notes on my phone; some of them glared at me anyway. “I would’ve glared at me too,” I thought. 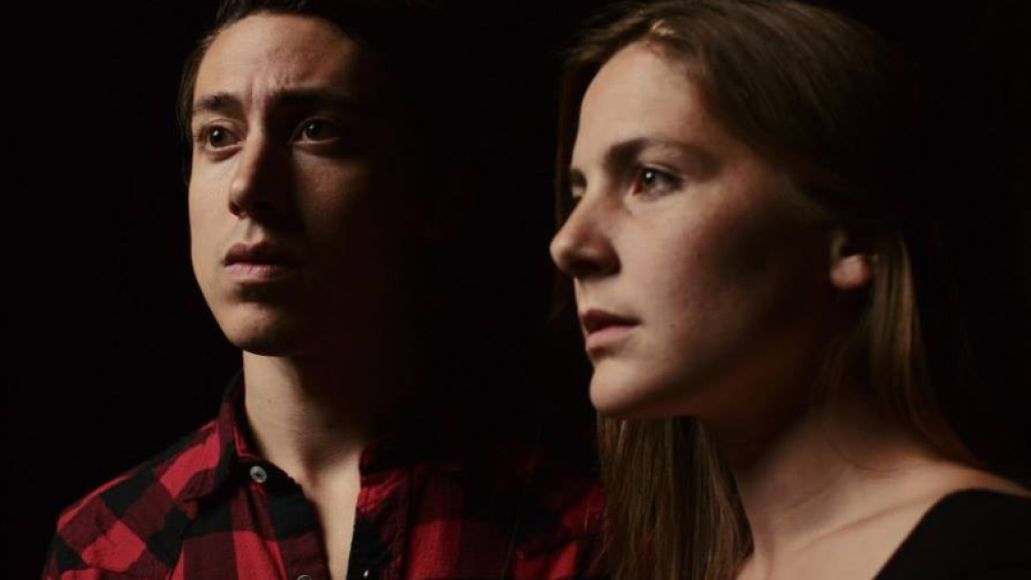 One of the best things about a Noah Gundersen show is that he performs with his sister Abby, and they have that wildfire magic sibling harmony that seems to only exist with shared blood. Their younger brother Jonathan also plays drums with the band now, transforming it into a full-fledged family affair. It just made me miss my own siblings more and start to get lost in nostalgia, but then Noah launched into an interpolation of Drake’s “Hold On, We’re Going Home.” It was definitely 2014.

The songs on Ledges are fraught with religious imagery and spiritual themes, and Gundersen’s prior work was, too. “I’m not a religious person anymore, “ Gundersen told SPIN magazine, who premiered the stream of his new record. “But I’ve learned that spiritual energy transcends religion, and that’s something I’ve attempted to incorporate into my music.” A deeply religious past is something else we share and the way that he uses his music to confront and explore what it feels like to grow up immersed in a Christian faith.

My favorite song of his, which he performed in the middle of his set at Rockwood, is called “Jesus, Jesus.” It’s a searching, desperate anthem that although addressed to the son of God, probes at the personhood of the deity it consults. “I know you said forgive them, for they know not what they do, but sometimes I think they do, and I think about you,” goes one line. It’ll send a chill down the spine of anyone who has seen firsthand the greed, destruction, and gossip that inhabits many religious organizations across the country. It sends a chill down mine every time I think about the poisonous interactions I witnessed in the church I grew up in.

As Gundersen steps into the mainstream music world and becomes more than just a local Pacific Northwest secret, maybe he’ll get written off as just another singer-songwriter. But I don’t think so. There’s more than folk here; there’s more than a few songs strung together to satisfy bedroom boredom. The songs on Ledges continue his tradition of writing with an air of desperation; it feels like the songs had to come out of him. Maybe that’s why Natalie and I latched onto them when we did. Learning to live separately and let go of our childhood was one of the hardest periods we had faced.

That’s the magic of his live show, though, a sort of vicarious, cathartic release of agony. Noah is bright and charismatic during the in-between-song banter, but the songs themselves are fraught with pain. The title track, “Ledges”, is a self-confrontation, an admission of flaws and mistakes that feel cliff-like in their enormity. “Cigarettes” lusts after an addicting relationship from the past and boasts a break from the dependence. Even after Noah and Abby played two encores, members of the crowd were caterwauling at them to play for “three more hours!” They just grinned and bowed off of the tiny stage, sheepish at the reaction but still beaming, confident now, that they deserved it. 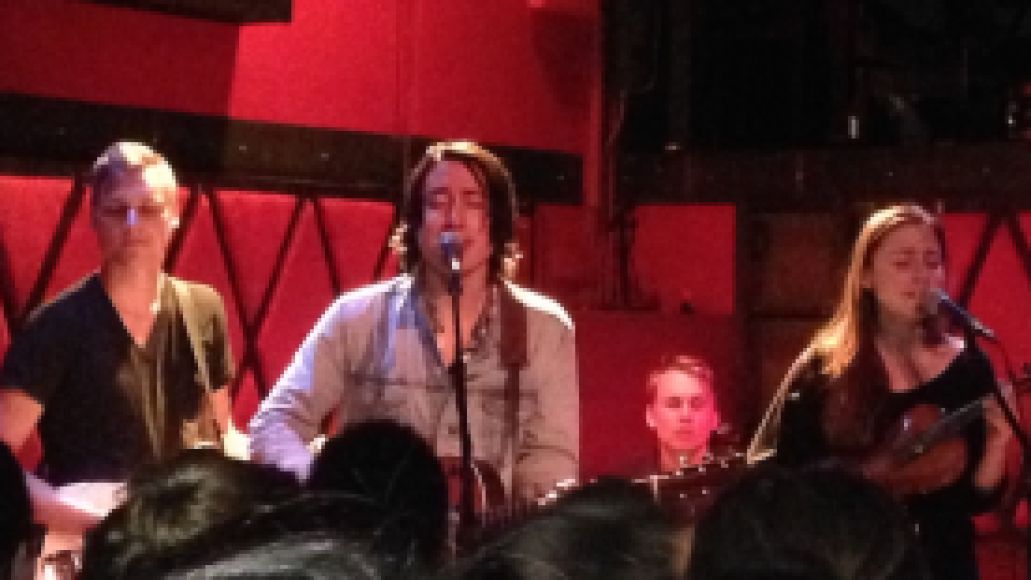 Will Noah Gundersen be a chart-topping artist that eventually sells out arenas? Will he be a songwriter respected in the tradition of other American greats? Will he be another obscurity that soon blips off the radar of the major label circuit? I don’t know, and I don’t really care. If he becomes a huge marquee star, I’ll be proud and happy that he made it. But even if he stays a relative unknown, my connection to his music is one of the only things that keeps me tied back to the time when I was just a fan of music. When this wasn’t an “industry” to me, but art that worked its way into my life with an important deepness that felt like the only thing that would ever matter. Even as he ascends the music scene, Noah Gundersen is already a memory to me, but that memory means more to me than the rest of this industry ever will. Noah Gundersen is my sister’s favorite musician, and I’ll always love him because she does.

My Sister Introduced Me to Noah Gundersen