Component is a section of Aux.Out. for one-off pieces, special editorials, and lost orphans of the music discussion. Today, Gary Suarez fails to complete his assignment, an oral history of 10-year-old Travis Morrison solo album Travistan. Instead, he wrote something better.

Travis Morrison got his ass kicked twice. In the first instance, the frontman for indie rock act The Dismemberment Plan fell victim to a surprise attack in the Georgetown neighborhood of Washington, D.C. in front of The Gap. Drawing from this, as artists are wont to do, he documented the assault on “My Two Front Teeth, Parts 2 and 3” off his 2004 post-Plan solo album Travistan. As the track’s title suggests, Morrison lost a pair of incisors as a result, an aesthetic insult added to an already frightful injury. Given his witty reference to hockey great Gordie Howe (who’d had four of his own knocked out), one hopes writing the song helped him recover in some way.

The second time Morrison took a beating he was made to endure the first one yet again. While obviously more in word than deed, the Travistan review published at Pitchfork a decade ago reads like that initial sucker punch outside The Gap must’ve felt. Directly below the 0.0 score, writer Chris Dahlen immediately, and then repeatedly, conjures the Georgetown attack from the opening paragraph onward. An unequivocal takedown, the review was a thorough thrashing, not unlike some of those hard-to-watch late-career Mike Tyson fights. 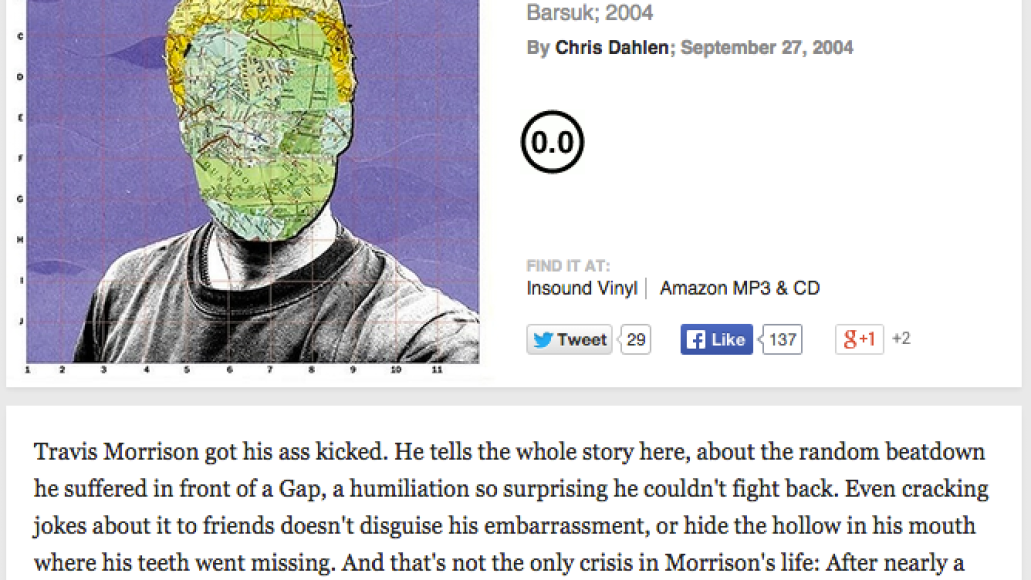 Travis Morrison didn’t want to speak to me, and I get that. “I am done talking about Pitchfork’s review of it,” he said via email. “And I know how you people are, lol.” Josh Rosenfeld of Seattle-based Barsuk Records, the label that released Travistan, initially expressed a similar reluctance and wariness during our phone call the weekend of Bumbershoot, a Seattle music festival with a reunited Dismemberment Plan headlining set. “It’s a boring topic for him at this point,” the Barsuk co-founder said, having conferred with Morrison the night before.

In lieu of conversation, Morrison graciously provided a statement succinctly summarizing his thoughts on Travistan 10 years later. Accepting some self-described “face plants,” he categorized the work as “experimental and very tentative,” citing “Song for the Orca” in particular as one of its highlights.

Rosenfeld, recalling the details of his initial listens with no small amount of uncertainty, remains unwavering in his appreciation of the record. “I think there’s a handful of really great songs on it,” he said. The promotional language on Barsuk’s website doesn’t seem to have changed since before the album’s release or the publication of Dahlen’s review. The last line, which includes the phrase “sure to please expectant Plan fans and new listeners alike,” remains in place as if in defiance. “To the extent that it failed,” Rosenfeld quipped, “it failed ambitiously.”

While creatively speaking Travistan met Barsuk’s expectations, the Pitchfork review seemingly impacted both the album’s sales as well as music press assessments elsewhere. Dubbing it an “anti-marketing moment,” Rosenfeld attested to witnessing a tangible change in the critical climate surrounding its release. “It was surprising — though in retrospect not surprising at all,” he said. “People who had already come to an initial conclusion found themselves magnetically drawn to the conclusion of the reviewer.” Though online venues like PopMatters published harsh accounts in Pitchfork’s wake, longer-lead print publications like Alternative Press and Spin published favorable accounts, as did Robert Christgau in his Village Voice column. “That so many people fled the scene in the wake of that review served to solidify my interest in standing by artists I love.”

A self-described “idealist,” Rosenfeld held out hope that the record would find its audience, as maligned albums infrequently do. Take Yoko Ono’s 1970 experimental freakout Plastic Ono Band, which bore strikingly similar artwork to partner John Lennon’s simultaneously released solo LP, or Metal Machine Music, Lou Reed’s 1975 apparent fuck-you to RCA Records. Critics were rather unkind to both, but without these releases it’s hard to imagine the noisemakers and industrial art terrorists — Sonic Youth, Swans, Throbbing Gristle — that subsequently emerged. However, in the case of Travistan, a record neither Morrison nor Barsuk intended to dupe or screw anyone by releasing, Rosenfeld said, “I’m not sure to the extent that that occurred.”

“Sometimes I think I may be the only person on Earth with a realistic appraisal of the damn record,” Morrison concluded. 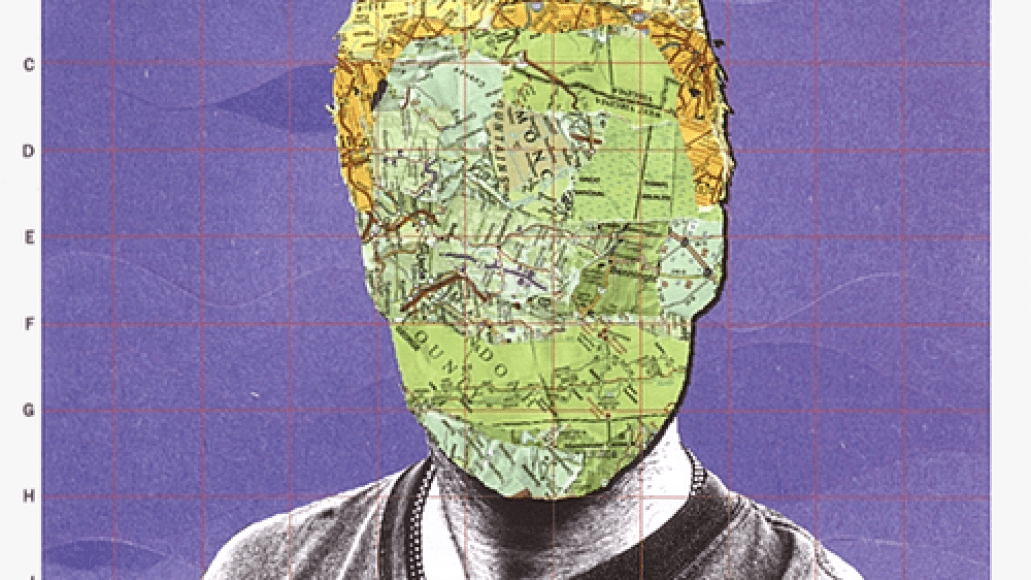 Chris Dahlen didn’t want to speak to me either. As with Morrison’s own reticence, I can’t say I blame the guy. Offline and off-record, we had a pleasant, professional, and brief email exchange that’s really nobody’s business but ours. Nowadays, Dahlen has more to do with gaming than listening; his latest Pitchfork album review was published in 2010. What role, if any, the subsequent reaction and legacy of his review had on this shift away from music criticism is, again, not for us to know.

Applying the purest and most rigid definitions, both Morrison and Dahlen did their respective jobs, as did Barsuk and Pitchfork. “I want to make it clear that I’m not embittered about it on any level,” Rosenfeld said, taking the position that while not agreeing with the review he believes “it’s totally their right to put it up there.” There’s little to be gained, then, by some shit-stirring third party pointing fingers or demonizing any of the people or institutions involved.

Nor, arguably, is there much sense in reassessing the album in retrospect to determine if it got a fair shake. Anyone familiar with the story has no doubt already formed an opinion on the matter based on emotion, reason, prejudice, and the degree to which one personally or professionally identifies with any of it. Using a convenient device like an anniversary essay to reevaluate who was right or wrong about Travistan at this late juncture holds about as much value as the 0.0 score itself.

“With something like the Travis Morrison record, I know that I would give it the same ranking no matter what… I think that a record can be so unlistenable and so terrible that it deserves that rating,” he said. “It’s totally subjective. So is it devoid of worth to me personally? Yes.”

Ultimately, Schreiber’s defense of the 0.0 review helps explain why the handful of artists who’ve reached that bottom ended up there. 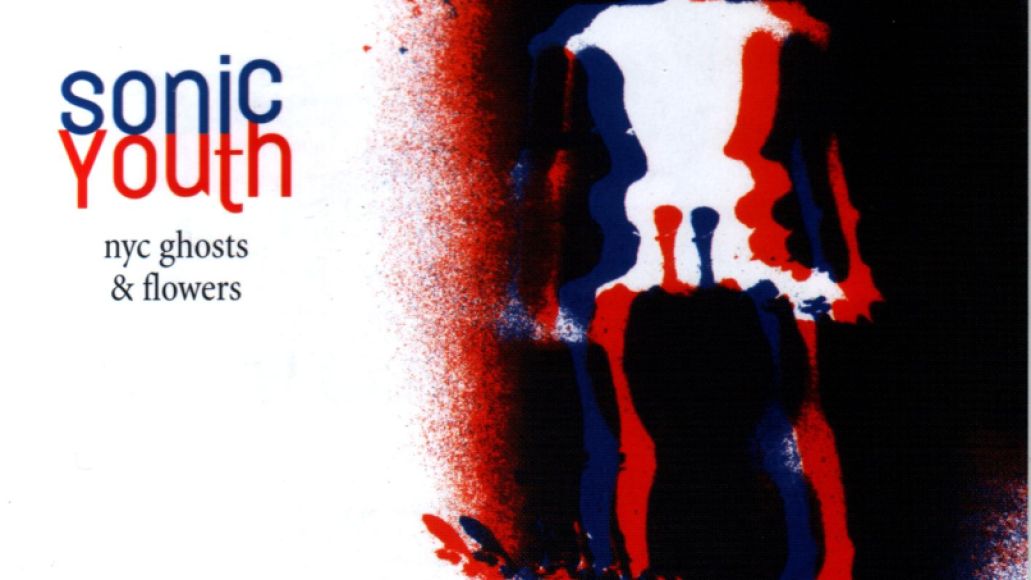 Much like the singular intent of a 10.0 review at Pitchfork — to exalt a musical work as definitively classic — grading at the other end of the scale often serves a primary aim: the expression of total disappointment. Sure, there have been memorable outliers like Jet’s Shine On, an album deemed so unworthy of words that the “review” consisted of an embedded YouTube clip of a monkey urinating in his own mouth. Looking at the rest of the 0.0s — a group that includes The Flaming Lips, Liz Phair, and Sonic Youth — it seems Morrison is in exceptionally good company down at the bottom.

“It’s sad that an artist as groundbreaking as Phair would be reduced to cheap publicity stunts and hyper-commercialized teen-pop,” wrote Matt LeMay in his 0.0 review of her eponymous 2003 record, having apparently exhausted all her Exile in Guyville goodwill. In response to 2000’s NYC Ghosts & Flowers, transplanted Chicagoan Brent DiCrescenzo took Sonic Youth down as though trying to topple their entire city. “It takes a giant to fall and make this big of a splash,” he wrote, lamenting Windy City cousin Jim O’Rourke’s involvement in the album. Giving a record a 0.0 is like hitting the gong on The Gong Show — it’s an action that says as much about the disapproval as the disapprover.


Clearly, not all 0.0s are created equal. In the case of Jet, it was a wholesale dismissal of their contribution to music. For Liz Phair and Sonic Youth, on the other hand, it provided a means to universally reject pieces of their respective discographies that somehow underwhelmed to the point of being undeserving. The review of Travistan falls into this latter category, a condemnation of a work deemed entirely unsatisfactory in the context of Morrison’s prior work with The Dismemberment Plan.

Subjectivity, that little thing Schreiber spoke of while defending the 0.0 in that New York Observer piece, has a funny way of operating. The Flaming Lips’ Zaireeka earned a more favorable second opinion from Pitchfork in 2011. Since NYC Ghosts & Flowers, however, there hasn’t been a Sonic Youth album (not counting movie soundtracks) that garnered less than a 6.8. Furthermore, follow-ups Murray Street and Sonic Nurse both scored in “Best New Music” denominations. Nearly 13 years later, DiCrescenzo published a piece at Time Out Chicago in which he admitted that the record he once maligned had actually grown on him. “The lesson here is,” DiCrescenzo wrote, “Beware the opinions of a kid right out of college. 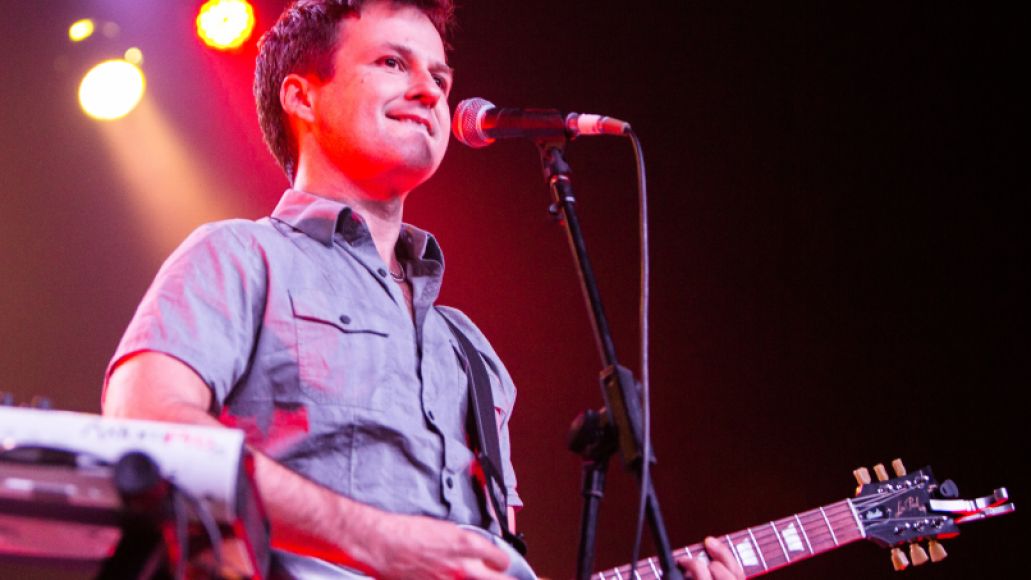 Given that after almost 20 years it remains one of the few outlets dedicated to the daily publication of serious music criticism, it’s reductive to view Pitchfork exclusively through the lens of its number system or to judge it by the tone of the writing in reviews so old they’re only found via Wayback Machine. Two years after the Travistan review, then-managing editor Scott Plagenhoef told Wired that Pitchfork acknowledged that they’d ceased being “little guys on the Internet throwing rocks at big artists.” It’s not hugely surprising, then, that the site has more or less ceased issuing 0.0s, though perhaps the right wrong album will come along someday. (The Pixies’ first reunion output without Kim Deal came very close.)

It became futile for me to press on with an oral history when so many key figures were reluctant to participate, and those that did admitted to being fuzzy on a lot of the details. (Early in our call, a self-effacing Rosenfeld chuckled, “The degree to which the details are coming to me is hilarious.”) It seems almost ludicrous for interviewers to expect to coax such detailed memories and quotable anecdotes from their interviewees when most people have difficulty recalling what they ate for dinner the night before. In face of rather polite rejections and fairly rational, laidback discussions, a writer might reasonably start to question whether there’s much of a story to tell at all. Maybe, beyond what we already know, there’s not much more to say about Travistan and the reception it received. With no grudges in sight, it’s perhaps a wonder that anyone else should still care. 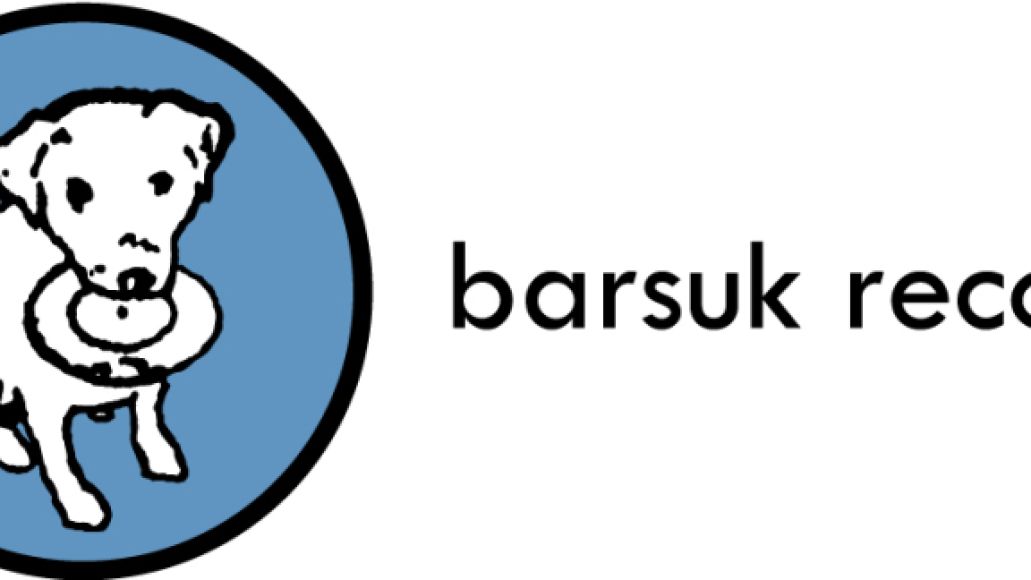 Over the past decade, Pitchfork continued to cover Barsuk Records releases, giving good-to-great reviews to most while scoring a smaller subset below average. Notably, a reissue of The Dismemberment Plan’s Emergency & I earned “Best New Reissue” status and a 10.0 rating, which puts Morrison alongside Sonic Youth in an elite club of artists that have had work scored at both ends of the spectrum. That review wastes little time in subtly differentiating Morrison’s 1999 classic from his solo endeavor. “Its songs–nervy, cacophonous, uncomfortably real–actually mean something to people,” wrote critic Paul Thompson of the former.

What, then, made the latter so different just a few years later? In response to a leading question of mine, Rosenfeld replied, “No, I don’t think it’s any more difficult than The Dismemberment Plan taken as a whole.” Morrison’s emailed statement included his own retrospective take:

“It’s one of those midcareer albums that life artists make where they choose fumbling for new things over doing what they know well with a sure hand and maybe less inspiration. Usually those records fade away except to people really curious about an artist’s journey, but of course there is now a music industry legend around the reception of the poor little tentative thing, and that keeps discussion of it going.”

After all this time, it’s kind of nice to let the artist have the last word.

Gary Suarez is a writer born and raised in New York City. He tweets.